There seems to be some consensus about defining \dif like this:

This looks fine in

but not so much in

What is the best alternative (or extension) when using the latter notation?

Here's an MWE which nicely shows the difference -- the second line is even shorter than the first: 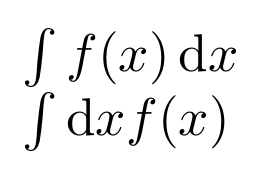 be a good solution? It certainly looks better.

You should use a different command for “improperly placed differential”:

and use it only if followed by other symbols (choose another name, if you want).

With \mathop{}\!\mathrm{d} you'd get an unwanted thin space between the integral symbol and the “d”. If you add a trailing \mathop{} you get two thin spaces between the variable and the following letter or one if a parenthesis follows. You could do

but this would be the same as just adding \,.

I see no chance of defining a command that can go either at the beginning or at the end of the integrand. Making the decision by looking at the next token would require big tables and several exceptions.

You may define a *-variant, if you prefer:

127
What is the difference of \mathop, \operatorname and \DeclareMathOperator?
114
Should I \mathrm the d in my integrals?
6
new command for the dx of intergral.

16
R-Integral symbol for my notes
3
LaTeX notation for summation over all combinations of two variables?
2
How to type specific things on the hat of expression?
4
Adjusting the width of a displaymath environment
5
Notation for proper normal subgroup
5
New Notation for Comma Categories
3
odd (?) spacing for logic notation