I am wondering if one can use TeX/LaTeX to typeset a full-fledged fiction book i.e. a prose, literature (not poetry) e.g. if Conan Doyle wished to write his Sherlock using TeX, what would you have in mind for him? Is TeX even right for writing a book (non-mathematical, I repeat)? I have used TeX and still am using for Math, Physics and Economics to produce articles, monograph and theses but never a fiction/literature book. Naturally, I want to have a ready-to-go template adapted for the leading world publishers style, requirements etc.

As mentioned in many of the comment, fiction books are usually much simpler than technical books. When I've typeset novels, I've normally used the book class and tweaked it with some new sectioning commands, then called it a day. How much redefining you need to do will depend on what kind of novel you want to write; are we talking about a longer novel, with several parts (say, The Stand), or a typical sci-fi paperback (say, Snow Crash)? Named chapters, or merely numbered? (I typeset one where each chapter was a different date, so the headings here were a bit more complicated.) In the simplest case, you can do something like this:

This will give you the fiction-looking following (plus a not-very-fictiony TOC at the top, just to show that it works): 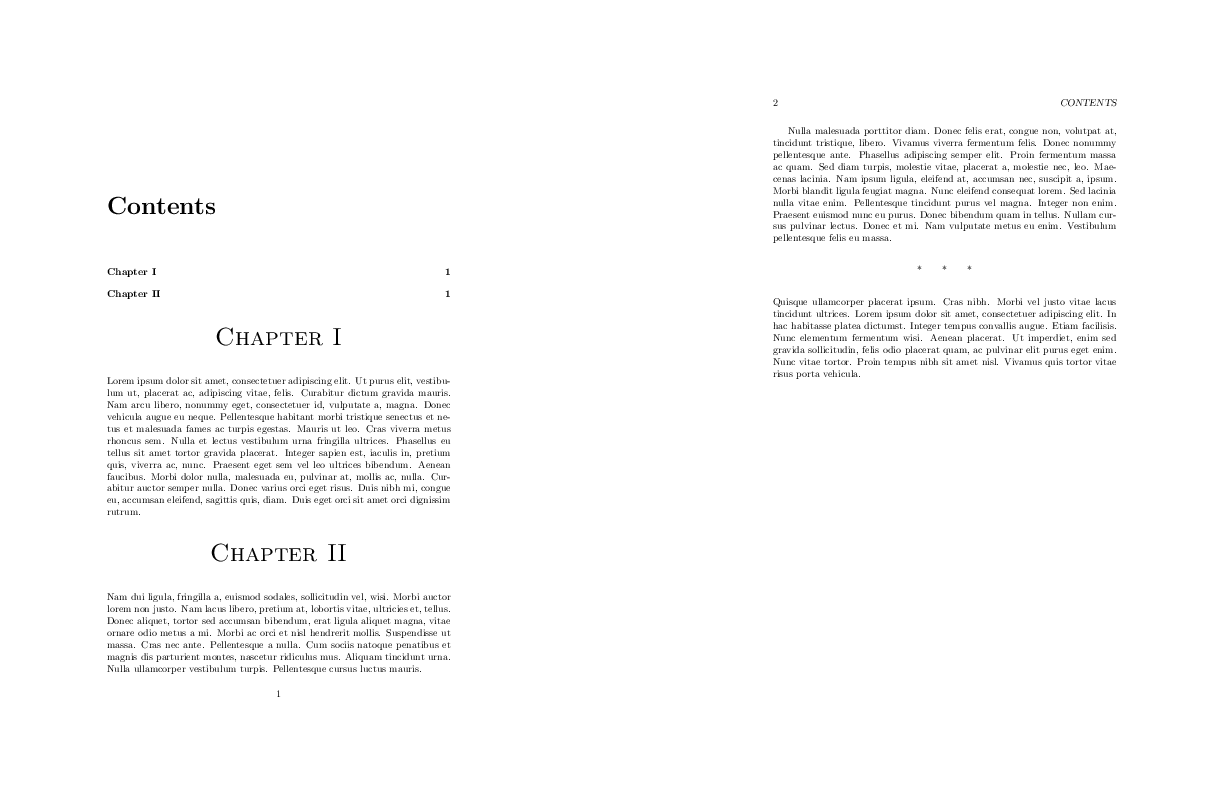 The problem with writing a "fiction" class is that, although the typesetting is typically much simpler than (say) an algebra textbook, the variation in fiction typesetting is huge. For one thing, when we say "fiction," do we mean short-stories, novellas, novels, trilogies? Do we want named chapters or only numbered? Both? What kind of section separators do we want? And so forth. At that point, we might as well just have a book or memoir class and trim it down.

As for publishers, I think one of the commenters already mentioned it: they just want very basic double-spaced type without much formatting. There are already classes to give this very basic appearance; e.g., manuscript (though that might get even more bare-bones than a publisher wants).

I hope this helps at least a little.

Not the answer you're looking for? Browse other questions tagged packages templates document-classes book-design or ask your own question.

10
Is there a class for typesetting novels?
950
Showcase of beautiful typography done in TeX & friends
24
LaTeX template for typesetting a novel
10
What's the chief advantage of Memoir over "standard Book" for a novel
3
What LaTeX / LyX classes, modules and templates are available for novel writing?