Is it true that when using \newline to stay in horizontal mode, the information will be on the same page?

I read here that using \newline keeps horizontal mode engaged. Is it true, then, that when I opt for \newline in for example

that the line and "Here is some text" will always be on the same page?

My understanding is that using \\ or \par switches to vertical mode briefly, which can lead to possible page breaks between content. This would not ensure that the line (\rule) and "Here is some text" would be on the same page.

I'd like to get a line followed immediately by tiny text (as close as possible without looking strange). They must always be typeset on the same page.

No, \\ in normal LR mode will not switch to vertical mode, nor does \newline.

In normal LR mode, the definition of \newline is \@normalcr\relax; the \relax is meant to avoid a subsequent * to be interpreted as a *-variant.

The definition of \\ is essentially \@normalcr, which however looks for a following * and an optional argument. If the optional argument is present, it should be a length and LaTeX inserts \vadjust{\vskip<length>}, which becomes \vadjust{\nobreak\vskip<length>} if a * followed the \\, then inserts \hfil\break to trigger a line break. The effect is to add a vertical space between the broken line and the following one; no page break can occur in case \\* or \\*[<length>] is used. In the former case, only \vadjust{\nobreak} is added, of course.

The \vadjust item adds vertical material which will be considered during page setting, after the paragraph has been broken into lines and the boxes so obtained are contributed to the vertical list under construction.

The possible added glue will be inserted between two lines in addition to the normal interline glue.

What you want can be easily obtained by 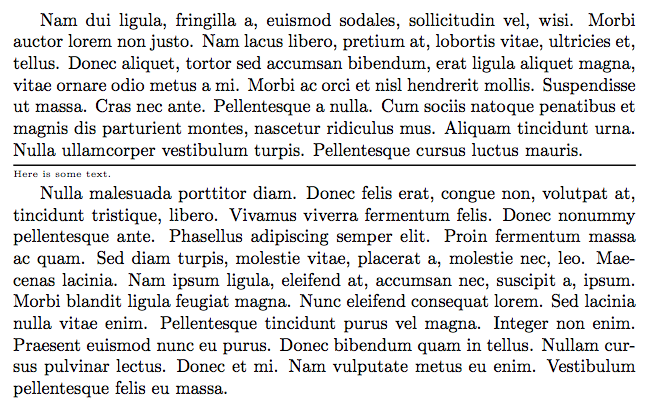 However, a simpler method is

This uses lower level tools and exploits the following facts:

So the rule with the tiny text cannot go to a new page, nor can there be a page break after it. If you want to allow it, remove the last \nopagebreak.

Controlling the spaces is easier this way. 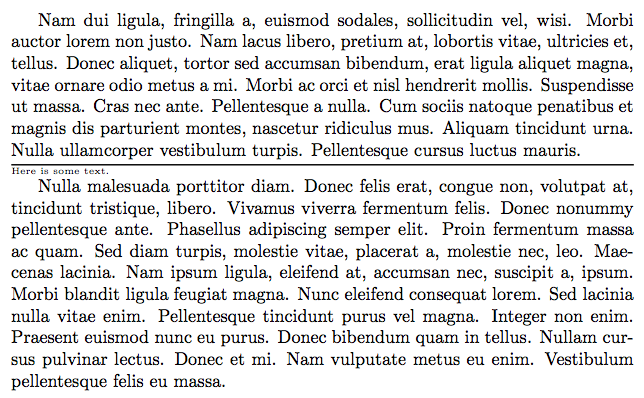 where both blank lines are needed (or could be \par which is the same thing).

The first blank line gets into vertical mode so that you can add the page breaking penalty (actually the blank line here isn't strictly necessary as \nopagebreak in vertical mode will work via \vadjust). the second blank line is needed so the tiny text is set with a suitable baseline, and suitably close to the rule.

Not the answer you're looking for? Browse other questions tagged line-breaking paragraphs or ask your own question.

13
How can I force long chapter names (including page numbers) to stay in the margins on the table of contents?
1
Text crossing the page margin in math environment
16
How can I make (La)TeX prefer to fill centered lines
4
Perfectly scale line, paragraph, image, anything up to textwidth
3
Changing paragraph begin/end commands
2
Textsize changes with \par
1
How to force a newline unless this increases the total number of lines
10
How to avoid final vertical glue for boxes with very tiny font sizes