I'd like to know if there is an automatic way of producing edges orthogonal to the nodes. In particular this would be useful when the nodes are automatically rotated. An example:

I'd like to connect the node "long text" with "C" but having the edge (in red) orthogonal to the node like in B.

I tried with the option "relative" but, in this case, the in/out angles are relative to the edge, not to the node.

I posed this question also in Define a new rectangular node with several anchor points in tikz , but I think it can deserve a questions by itself.

Side question: I don't understand why the edge starting from (B) does not start from the center of the (B) but it is slightly on its left.

Depending on how often you need to access this information, you can make a math function and so on but the essential idea is to get the orientation using either anchors or anything that has the slope. For example you can use the frontend with let syntax. 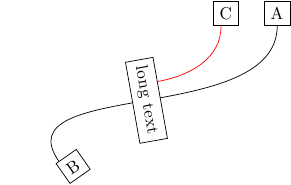 12
Rotate a node but not its content: the case of the ellipse decoration
13
How to define the default vertical distance between nodes?
1
Define tikz node based on pagenodes
5
Computing the rectangle encompassing a node and a point
13
Numerical conditional within tikz keys?
2
Using fit with nodeparts
0
two links between nodes in tikzpicture
4
Tikz, after defining nodes midway on a path, how to connect those nodes by a draw[->] which matches the path?
8
How can I draw angled lines in LaTeX to create ruled template for calligraphy?
1
Arrow between BTrees