Space on the right hand side of a unary math operator

Edit1: for instance, i want to define a function NOT b such that NOT true returns false, and NOT false returns true. How could I space NOT and b under math mode?

There are a variety of spacing techniques in math mode that you could consider. The following is taken verbatim from Herbert Voss' Mathmode document on horizontal alignment. It showcases the different types of spacing available and compares them very well: 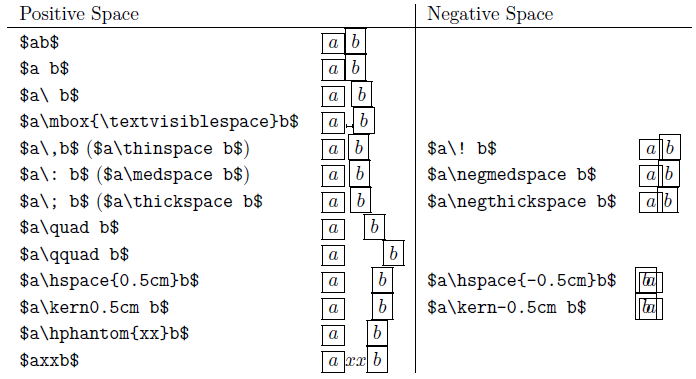 Consequently, here's an example that defines the command \NOT{<bool>} that places \sim (the negation operator), followed by a \, (\thinspace), followed by <bool>:

You don't specify just how much extra space you'd like to see between the operator and its associated variable/constant, so I'll assume that it's the amount of space that would be inserted if it were a binary rather than a unary operator. In the code below, the "fake binary" operator is obtained by inserting an empty group, {}, in front of the otherwise unary operator.

Edit1: OK, based on the Edit1 of the question, I now believe that what the OP is after is a method for creating a "math operator" called, say, "\NOT", which inserts a bit of space between the operator's text and its argument. To get such an operator, I suggest you load the amsmath package and issue the instruction

An MWE, which assumes that the words "true" and "false" should be rendered in small-caps.

If you are using the amsmath package (\usepackage{amsmath} for TeX Live) then page 15 of the User's Guide indicates that extra spacing (from least to most) is \thinspace, \medspace, \thickspace, \quad, \qquad. Negative spacing is also covered as is using symbols (such as \,) to generate equivalent amounts of space. So the answer to your question depends on how much space you'd like.

73
When one should use spacing line \quad or \,
31
Multiple letters without spacing in Math

26
Print programs with its proper syntax
2
Defining a prefix operator with space before its argument
11
What is a good method for producing a unary plus/minus sign that always works?
16
Mixing math character classes (e.g. \mathord to the left and \mathrel to the right)
1
Spacing in commands for math mode
3
Spacing is off with convenience command
12
How to define a new triangle symbol with middle line for use as a maths operator?
2
unexplained space in math mode (left/right brackets, vphantom)