Commas in edge labels during for-loop in tikz

I am making a picture of an automaton where the transitions have comma-separated tuples for weights. This isn't a problem until I try to space out transitions in the same part of the graph using the for-loop syntax (hat-tip to: How to draw a many edges loop above - tikz). Because the edge labels for the for-loop are separated by commas, each element in the tuple is grabbed as part of a new label by the loop, rather than being part of the label.

To avoid this I have omitted commas. The result is that the manually specified arc looks the way I want it to, but the one created by the for loop does not (no commas between elements). I get the impression from Using double for-loop in tikz that the for-loop just does not support what I am trying to do, but I'd like to make sure.

P.S. The graph I am making does use several arcs, so there is some reason to use a for-loop.

The usual way to use values which include commas in \foreach loops in TikZ is to protect them using curly brackets. (Note that coordinates can be handled specially so don't use this method for those.) 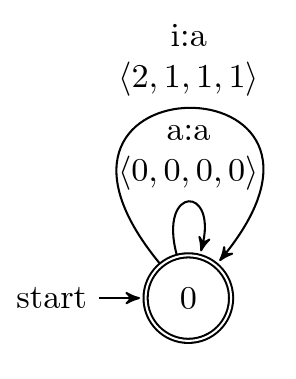 28
LaTeX equivalent of ConTeXt buffers
10
TikZ: edge should not interfere with other elements in the graph and label positioning
13
How to define the default vertical distance between nodes?
7
Tikz edge label position
4
Overlay edge between two tikz nodes
12
Drawing rectilinear curves in Tikz, aka an Etch-a-Sketch drawing
9
Line up nested tikz enviroments or how to get rid of them
3
How to draw a square and its diagonals with arrows?
1
Arrow between BTrees