How to animate a path or how to draw starting fraction of a complex but linear path?

I would like to reproduce something similar to Animating Protocols but with a compound path and not a straight one.

pgf's manual only uses 'named path' to find intersections, so I don't know how to use them once defined.

Caramdir's answer to TikZ: draw only a certain central length of a given path uses a decoration to draw only some part of any path. I've already adapted it to draw the starting segment of the path, but I would like to draw a certain percentatge of path length and not a fixed length (3 cm). I couldn't find in manual how to provide a parameter to a decoration.

And in Length, surface, and coordinates of a tikz-pgf path, Andrew Stacey proposes to use a new TEX-SX package still in development. It seems to be they way but I think there should be a easier solution.

Do you know it?

Here's the decoration Caramdir came up with, adapted to draw only the first fraction of an arbitrary path: 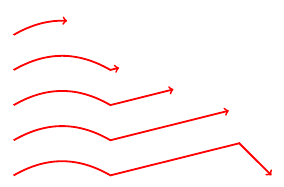 Not the answer you're looking for? Browse other questions tagged tikz-pgf pgf-core animate or ask your own question.

19
TikZ: draw only a certain central length of a given path
7
Animating Protocols
9
drawing(uncover) a curve bit-by-bit using tikzpcture and beamer and \onslide
11
Decorate path at points specified by function
7
Animation in beamer?
4
Length, surface, and coordinates of a tikz-pgf path
8
TikZ decorations: How to draw a closed path little by little?
2
Animate Line / Path using Tikz and 'animate' package