Telling TikZ to continue the previously-drawn path with a line-to operation?

This question seems quite simple, so I feel a bit sheepish about asking it, but I've spent quite a while scouring both this site and the manual without any success, so here goes...

does not produce the same result as

and this surprises me. I would have thought that, in the second case, the path would begin where the previous path ended. That is my expectation based on Section 14.2 of the manual, concerning "The Line-To Operation" which says:

You use two minus signs followed by a coordinate in round brackets.

However, I'm clearly missing something. But what? Perhaps a clue is provided by the answer from Loop Space to Saving and reusing/combining paths in TikZ? that states:

TikZ does not blank the current soft path when it starts, so when a command such as \draw starts up then it simply appends its stuff to whatever was there already. This is usually the empty path because whenever a path is used (ie rendered) then the current soft path is set to "empty". But it needn't be. [emphasis mine]

I suspect that is related to what I'm observing here, but considering how simple my question is, the suggested solution there feels far more technical that I'd expect to be necessary. In some sense, my question is just:

How can I tell TikZ to begin a path from the end of a path that has already been drawn?

To clarify, the fact that two separate "draw" commands are mentioned in my question above is essential. That is, I realize that

would produce the desired result, but the question, again deals with continuing a path that has already been drawn. I have rephrased the question above to try to make this more clear.

As percusse points out, after a path is used, it is forgotten and is no longer the "current path". However, the intersections library provides a key to name a path and save it so can be "remembered". In the following a from end of path key is defined which can be used to start a new path from the last point of the end of a remembered (i.e., named) path. 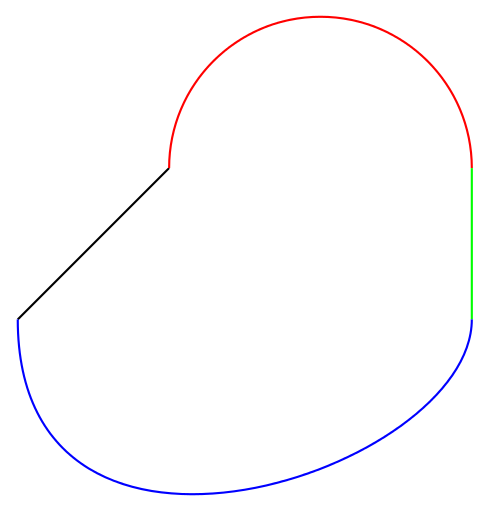 Every draw command resets the last known coordinate to the origin. In fact your second command of your second example shouldn't draw anything because the pen is not put down which is required by the PostScript/PDF specs by an explicit move-to operation.

At every succesful parsing of the path until a ; is encountered is stored and then converted into soft path syntax and then rendered. After this current path, last point known to TikZ and PGF is reset.

Hence, your quoted part from the manual is valid within the same path command. Or if you are building with the lower PGF level syntax until a \pgfusepath is encountered.

3
Drawing a Markov chain - How do I update the value of a variable in TikZ?
3
line associated with tikz \draw operation is not obscured by objects on \backgroundpath of new shape
3
The perplexing path direction of TikZ
11
How to refine this tikz diagram?
1
Close scope for global options in a tikz-pgf path
9
Line up nested tikz enviroments or how to get rid of them
0
(TikZ) Comparison of Path on Sphere to Associated Path in the Tangent Plane
1
Tikz line doesn't start exactly from node coordinates
2
Syntax of `-​- node`?