I'm using the book class and I'd like appendix labels (letters) to be in small caps everywhere, particularly those generated by \ref and \autoref. I've tried doing it by redefining \thechapter after the \appendix command (or by patching the command in the preamble), but I run into an error with theorem headings if I use hyperref.

It doesn't compile, while if I remove hyperref it works and the label generated by \ref is correctly in small caps.

(In the actual document I get a different error which has to do with microtype and using Minion Pro, but it also disappears if I remove hyperref and redefine \autoref to be \ref.)

Is there some other way to change this? A solution which applies small caps only to the output of \ref and \autoref would be fine, since elsewhere (section and theorem headings and so on) the label is already in small caps in my actual document.

Despite of the non standard way: \textsc is a non-expandable command, this will break in conjunction with hyperref. The expandable form is \scshape (small caps shape).

The real problem is however, that \chapter, \section etc. use \bfseries to display the heading titles of of chapters etc. There is no bold small caps version of the standard fonts, so this will not display as small caps then, that's why \thesection and \section display a instead of A.

In my opinion \alph should be replaced by \Alph here!

However, I don't recommend this smallcaps here at all, especially since A in small caps is smaller than the numbers. 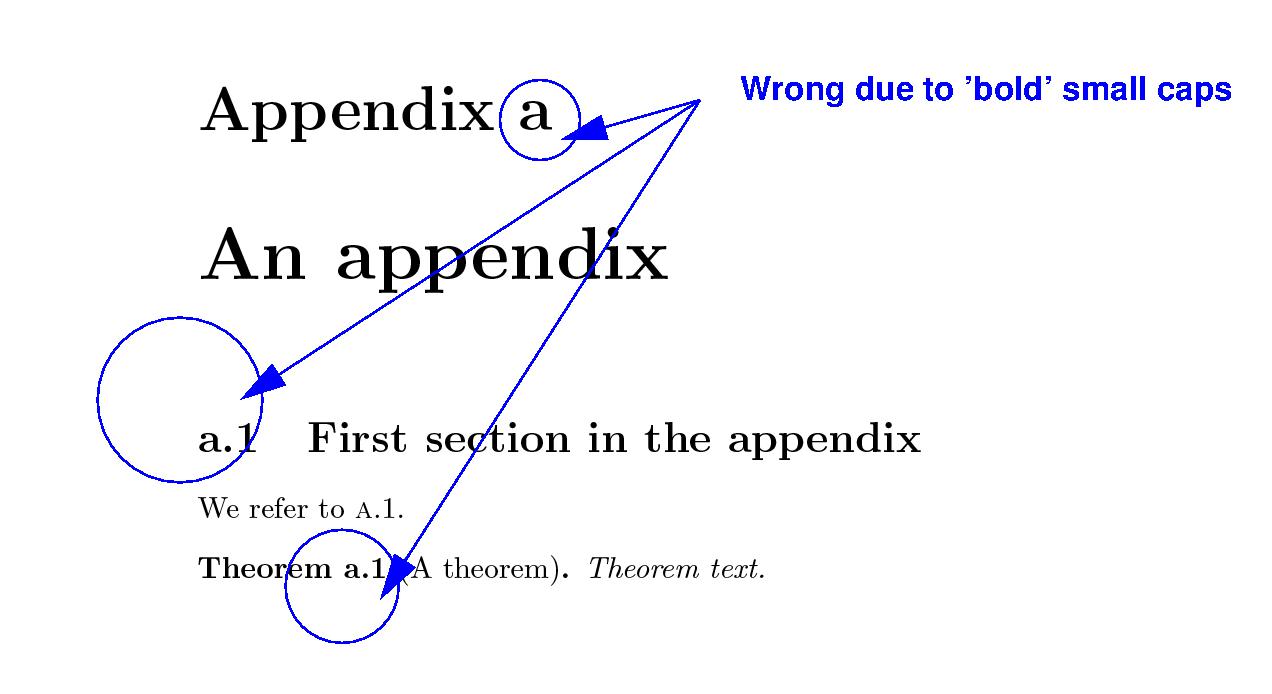 Not the answer you're looking for? Browse other questions tagged fonts hyperref cross-referencing appendices or ask your own question.

2
Numbering and cross-references
4
Amsbook: Theoremstyles definition and remark identical?
8
redefining \label and \ref when using hyperref
3
Write Latex code for appendix within chapter but typeset at end of book
1
KOMA-Script's scrreprt and appendix
3
Thesis table of contents: including chapter-specific appendices immediately after their respective chapters, rather than all at the end
3
Removing boldface from appendix chapters in TOC
3
Hyperref and theoremstyle break: red box drawn on line above
1
Appendix chapter naming - titlesec/appendix clash
0
Defining custom labels with hyperref