Fit text into given box by adjusting the fontsize

I would like to fit text (potentially several paragraphs) into a box of given size. This should be done by adjusting the fontsize of the contained text.

Clarification edit: The given dimensions are the maximum space the result should occupy. There is no need to fill the box fully, but under no circumstances should the dimensions be exceeded.

There are a number of questions here that ask the same in the title, but then only target to constrain the width or the height. I want to constrain both. Also, I would like the text only the be adjusted in the fontsize, not scaled disproportionally in one direction.

@TH solves this for another question by fitting text on a page. Unfortunately, my TeX knowledge is too limited to adapt that to a box. See here: Fitting and centering text (both!) in a constrained area For a page-fitting, his solution looks great to me. Maybe that's a starting point.

Edit: comparing the solutions from Werner and Martin

I've used XeLaTeX from TeXLive 2011 to compare the solutions from Werner and Martin below. The font is a TrueType Times New Roman vector font. The fitboxes are contained in a framebox to help comparison. 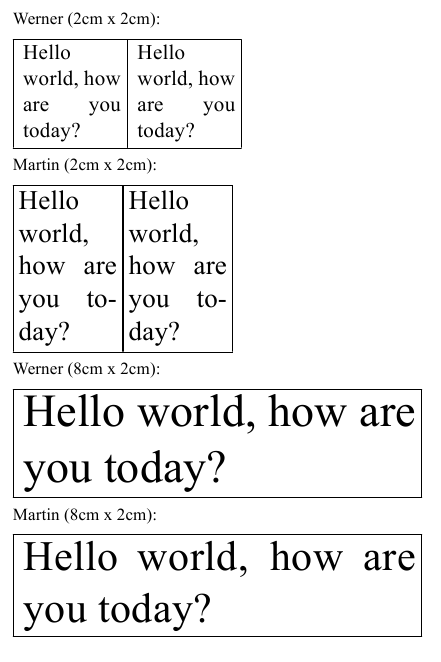 Both boxes can be stacked next to each other horizontally and only consume the space they should. However, in Case 1 the box with Martin's approach is too high, while Werner's box fits the content correctly.

Edit 2: some more tests show: both suggestions can fail

After some more tests, the case illustrated below fails for both suggestions from Werner and Martin. That means, the question is still open. 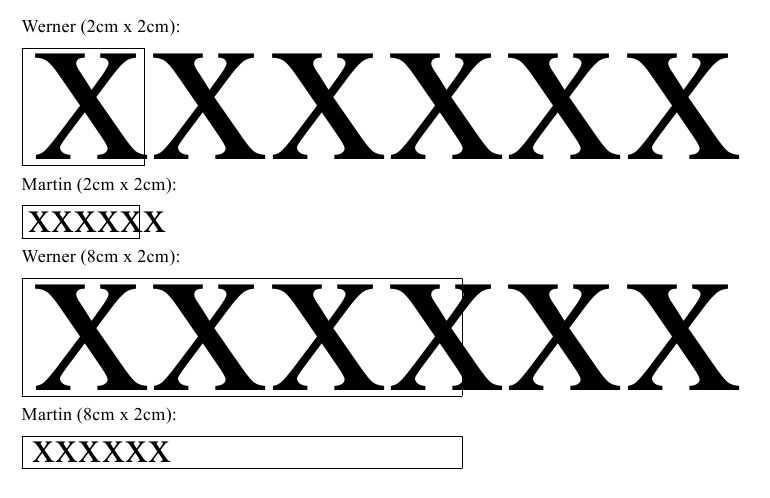 As Werner points out in a comment to his answer, the reason is that TeX cannot hyphenate the pattern. At the same time, it finds it acceptable to set it into the box and run over the edge.

After some research I believe that the algorithm after each line would have to check for \badness and if that exceeds 10000 reduce the font size further. At least the TeX pearl from Paweł Jackowski points in that direction.

Has anyone the insights and experience to put these pieces and the excellent work from Werner and Martin together into something that works and really stays inside the given box?

Edit 3: Another idea that might help to solve this

Another approach that might help would be a way to measure the width of the longest word (or box) of the paragraph, let's say it is wl. The associated font size is f. The maximum desired box width as given by the user is wmax.

Then, the upper bound for the font size could be calculated by

This, of course, assumes that everything works out proportionally, which probably isn't entirely true considering inter word and inter character spacing. But it should be sufficiently good to keep the text in the fitbox horizontally.

Since this can only shrink the fontsize (it's an upper bound), the vertical condition if met before would still be met afterwards. That means, this could be applied after the suggestion of @Werner as a check and adjustment if required.

Does anyone have the TeX experience to stick that in?

Using the suggestion in Fitting and centering text (both!) in a constrained area, together with Martin's answer that uses the environ package, the following provides the environment

which typesets <stuff> using a form of binary search to fit the text within the given height <height> while under a fixed width <width> constraint set by a minipage. This is required in order to maintain a proportionate scaling of the font and leading (\baselineskip). 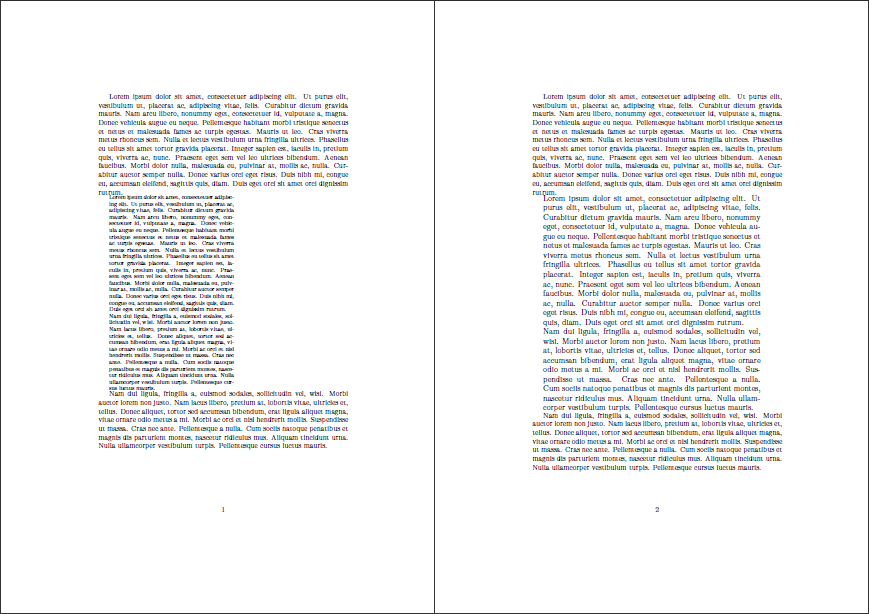 Interestingly enough, I'm having trouble compiling this under TeXLive 2011. Although, there is no problem compiling it using the online LaTeX compiler ScribTeX, which runs TeXLive 2009. I don't know what the cause behind this is... This has been fixed by the replacement of \protected@edef\stuff{\BODY} with \def\stuff{\BODY}. The original code used this form since it provided two macros - one for parsing the content (called \fillthepage{<stuff>}) and another for updating a resized version of the content (called \buildbox). I assume the coding structure required this. However, with everything contained in a single environment fitbox above, this is not needed anymore.

I found a way to solve the problem - almost. It builds on the approach outlined by @Werner. Essentially, it adds a test for the badness of the box as a measure for text running over the edge. The test is a recursion that unfortunately only works for the last paragraph of the text in the environment. So there is still some refinement required. 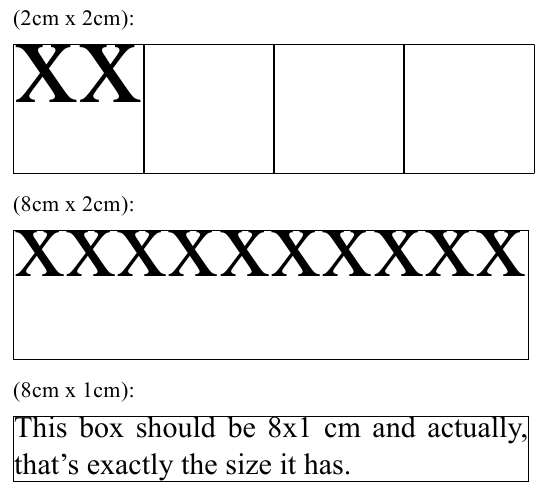 There is no longer any text running over the edge for the cases discussed in the other answers and the question. Instead, the font shrinks and part of the box remains empty.

Here my idea: Capture the content using the environ package, place it in a box which uses a minibox with the given width. Then measure the ratio between the requested height and the total height of the box and use relsize and its \relscale macro to typeset the content again with this size. This depends on the use of a scalable font. It doesn't work for me for some input, because there seem to be scaling limits.

The problem as stated cannot be optimized, certainly not with the TeX engine, that introduces paragraph and line optimization and hyphenation. Consider the following code: 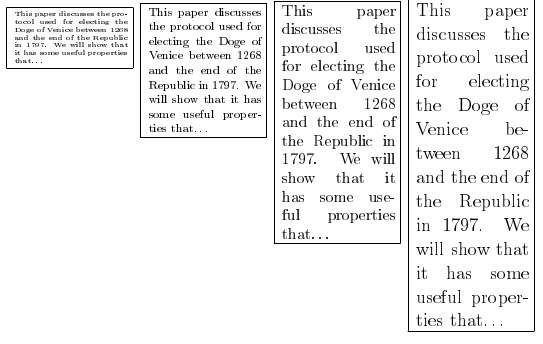 The code constraints the width and lets the height be adjustable. I have used a comma delimited list for the allowable fonts (this way you can change the baseline, as you should with different size fonts and even you can produce definitions with hyphenation parameters as well) and hence one can optimize over a discrete domain. The problem is then easy to solve. The first font that results in the box height exceeding the constraint, points to the solution which is the n-1 font count used.

The most stable way (in my eyes) is to declare the adjusted fontsize/baselineheight pair directly. As both have to stay proportional to each other you can scale down both by the same factor, which is approximately the square root of the quotient from measured and target height. (The complete example below smoothes down this factor to gain a little more presision.)

Luckily, the graphicx package provides the \scalebox command, so one can feed the calculated factor to this command directly to get the right result.

Yet, the most accurate way seems to consist in using the anyfontsize package. The algorithm for finding the target font size and baselineheight is: first shrink the baseline by the ratio of target height and actual height and the fontsize proportionally (similarly to the suggestion of @MartinScharrer) and then factor in the relative difference consecutively til a certain accuracy (which I defined to 0.0001 in the below example).

Note: As well as this method is accurate it is also very fragile. For many cases it will in fact yield good results but it will fail miserabely in some extremer cases.

A bullet-proof solution would be to use the standard fontsize switches. The algorithm I propose is simple brute force: if the text exceeds the borders of the box use the relatively next small font, else use the next higher one unless it would blow up the borders of the bounding box.

This method is safe as its termination is guaranteed and the "complexity" is bounded by 5. The only limitation is that the text can't get smaller then \tiny. Hence, if the ratio between actual and target height exceeds some constant c>1 the content can't be fitted completely anymore (which I find a reasonable limit as \tiny text is alredy not that easy to read in general).

The below code contains the complete implementation with a small test for which I defined a wrapper command \fitboxdemo{<n>} (n in cm). The actual command is \fitbox and its synopsis: \fitbox[<width>]{<height>}{<content>}

I fixed the single paragraph limitation of kongo09's solution by replacing the definition of \badnessbox with the following:

Not the answer you're looking for? Browse other questions tagged formatting fontsize boxes minipage automation or ask your own question.

1
Reduce font size to fit container
120
How to put a long piece of text in a box?
128
Put entire thesis on one A0 poster?
10
"BigText" formating: how to adapt the fontsize to make all lines have the same width?
15
Fitting text into a box over-a-pic
11
Adjust font size on-the-fly
10
Fitting and centering text (both!) in a constrained area
10
Insert text into a fixed size box
10
Making the text fit in a specific space in Latex
10
Forcing a Document into a Single page
See more linked questions

11
Adjust font size on-the-fly
15
Fitting text into a box over-a-pic
8
Resize box to fit text
1
Render content normally, then wrap into box of given size, letting text stick out to the right
3
Fitting text of unknown length into a box through font scaling
1
Scale text/formula to fit area preserving aspect ratio
10
"BigText" formating: how to adapt the fontsize to make all lines have the same width?
3
fontsize does affect only part of the text