How to use macros in pstricks as coordinate arguments?

OK, as a good novice I have come across an impressive feature (the ! symbol that allows direct injection of PostScript as coordinate arguments. I can really simplify my work with this feature so I started experimenting with it.

use of \psdot@ii doesn't match it's definition

I guess my question is twofold

The example works without default arguments perfectly. I welcome anyone to give an explanation as to why a default would toss the monkey-wrench

doesn't work because spaces are ignored after control sequences, so when \pAa is expanded what results is

which is illegal PostScript code. If you say

you get what you expect.

doesn't work for two reasons: you have defined \pAb with an optional argument that should be enclosed in brackets, not braces. However, also

wouldn't work, because the definition is not “fully expandable”: its action is producing the commands for printing !1 2, not simply to those characters.

The correct definition should be

and calling \psdot{\pAb{2}} will do. No default, however: the argument is mandatory. 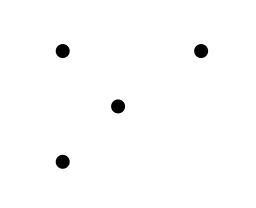 You can modify your macros then there will be no need for the \space:

1
How to remove PSTricks dictionary or library codes in an EPS file produced by dvips?
1
putting \psframebox with the left corner coordinate in PSTricks
5
What is the unit of the coordinate system in PSTricks?
2
Can't use pstricks - boundingbox error
4
Define new PSTricks object with arguments
1
Error in PSTricks in circuit macros
3
LaTeX Trellis Diagrams for STBCs
2
PSTricks: problem with y-coordinate
3
Tweaking coordinate markers in pstricks
6
How to use “ shadow ” in pstricks?