Change math font for figures only (including TikZ environments within figures)

In my document, I want the main text to be in the times font, and the math to be in the txfonts font. This I can do with the help of the txfonts package. However, I want everything that shows up in my figures to be sans serif, including the math. So far I've been able to change the text font to sans serif but I also want to change the math font to a sans serif, both in the caption and the figure itself (where I use TikZ).

Here's a minimal (non-working) example that needs tweaking. The problem is the math within the figure and the caption which now is txfonts.

You can use the sansmath package in conjunction the float and everyhook packages to change the math within the figures only. This solution inherits all of the problems associated with sans math as implemented by the sansmath package. (See its documentation for details.)

You can use amsmath to influence the math font: 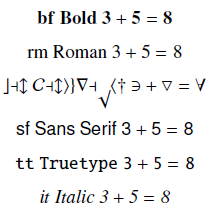 Not the answer you're looking for? Browse other questions tagged tikz-pgf fonts math-mode sans-serif or ask your own question.

10
pgfplots: Using Sans Serif Fonts for Numbers and Text (not Variables) in Figures and Diagrams
9
Switching math fonts and back to normal fails in figures?
4
pst-circ monospaced labels

10
Sans serif font with distinguished capital I for math.
10
Bold, italic math (\bm) and sansmath
5
How to make written text within math mode appear using the font of the surrounding text in ConTeXt?
6
How to combine another sans-serif math font with helvet for text?
6
How do I make a TikZ graphic with small sans serif font?