Now that I'm procrastinating with tweaking LaTeX, instead of finishing my Ph.D. thesis, I'm wondering what's the most beautiful way to typeset source code (C#, C++, LISP, XML, BNF) in LaTeX. Currently, I'm using the listings package, and the literate option, to search&replace some characters with mathematical equivalent symbols, such as:

Although one can find some inspiration for symbols in CWEB, I'm wondering if there exists any standard symbology for common programming (and domain specific) languages. Or maybe more appropriate packages (btw, I'm not looking for fancy syntax coloring, which would ruin my two-colored document).

Since there was some users concerned if this should be regarded as a good practice, I think this question deserves some further explanation. Overall, I have to both agree and disagree them (and I think a lot of the literate programming community too). Here's when:

Still, I maintain my original question: "examples of beautiful typography of source code".

What I've used them for is specifying typography for symbol pairs that aren't very readable in the standard non-monospaced font -- not replacing them with a different symbol, but adjusting to make the same symbols more readable. For instance, "--" doesn't look right in Times, so I've used literate={--}{{\texttt{--}} to make that look better.

Meanwhile, when one's using illustrative pseudocode in discussions of algorithms that are detached from details of programming language syntax, I do think it's useful to use non-programming symbols. For one thing, it helps make it clear that what you are writing is not compilable C code -- even if it has a C-like syntax, and is really just C with irrelevant bits removed. (Or Lisp, or whatever.) And, since the "irrelevant bits" are going to vary from discussion to discussion, I haven't found that one specific pseudocode format applies to everything.

For the logical operators, it is quite natural to use \not, \and, and \lor.

But in general, I agree with Aditya: the more the used symbol deviates from the actual input, the more likely it is to create confusion. For example, Pascal WEB uses a leftward pointing arrow for assignment (:= in Pascal) and I find that quite confusing, even after years of exposure to it.

Sorry to dig this topic, but, meanwhile, I've found a similar thing was done in Emacs for live editing programming languages such as Haskell. Sequences of symbols are replaced by unicode characters, greatly improving readability. The same principle can be applied to LaTeX documents. Here's a link describing how to configure such technique, and here's a screenshot taken from this blog: 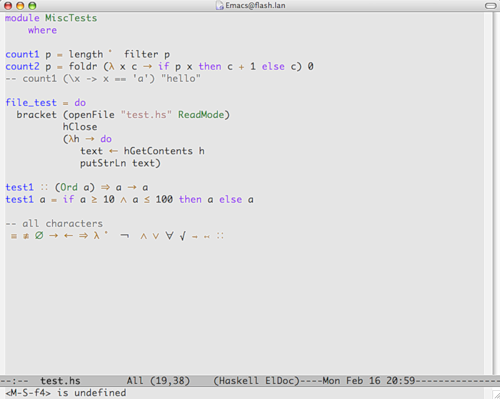 Another typical usage is in Literate Haskell, by the lhs2tex tool.

For typesetting code in LaTeX, use the listings package, or minted (that one requires pygments, and runs your code through an external beautifier that handles an incredible variety of languages, even colorizes the output for the so inclined).

Whatever you do, just please don't replace the language's symbols for some perceived "mathematical equivalent". The language isn't written that way, and $\wedge$ has a very different meaning than e.g. C's &&.

For typesetting algorithms, I use algorithm2e. There you can run wild with mathematics notation.

Not the answer you're looking for? Browse other questions tagged typography listings pseudocode or ask your own question.

14
How to create these nice operators?
3
How to make code (python, java, scala) looks as beautiful as algorithms?