I have nearly finished writing my ph.d. thesis, and throughout I've been using regular parenthesis mostly, for everything math. Now, I'd like to replace all instances of (...) by their \left(...\right) variant. This is quite an immense task to do manually.

The best I've been able to come up with is a regular expression that finds all pairs of parentheses that do not have the \left and \right prefix, and then check manually and replace accordingly.

Surely this community must be able to come up with a better solution?

Warning: The following answer will not help you achieve your stated goal. Instead, it is meant to convince you to abandon your plan, by showing that using \left( and right) everywhere in math mode is bound to produce poor typographic results.

Incidentally, while you mentioned round parentheses in your posting, I assume you also want to include square brackets, curly braces, angle brackets, vertical bars, and all other (typographic) "fences" in this exercise.

In addition to needing to be aware of three obvious, major typographic issues that tend to arise when using \left and right everywhere -- the resulting fences may be too large; the resulting fences may be too small; and the spacing around the fences may be too wide -- you also need to be aware of problems that arise in inline-math cases. Basically, TeX does not insert a line break inside a term delimited by \left and \right; this can easily cause massively overfull lines. Moreover, TeX cannot adjust the spacing around binary and relation operators (such as + and =) if the formula is delimited by left and \right; this, too, may easily cause overfull lines.

which generates the following output: 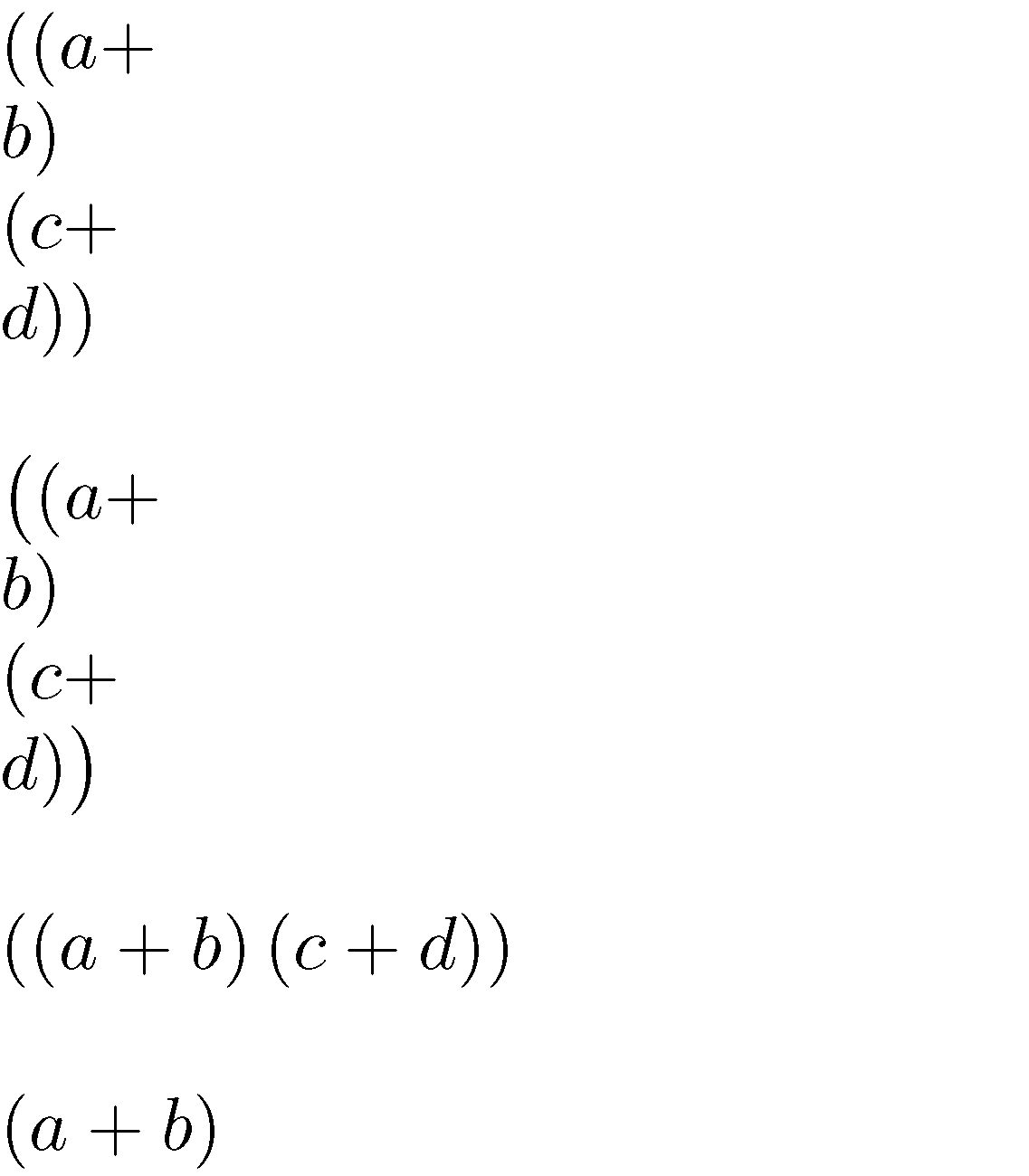 For the first two formulas, which do not contain \left and \right directives, LaTeX was able to find three potential line breaks. In contrast, the third formula, which contains three \left( and three \right) directives, not a single line break was "found", despite the fact that one \allowbreak statement is present. If such a formula occurs anywhere near the right-hand edge of the text block, an overfull line will almost certainly result. Incidentally, in addition to the non-presence of line breakpoints, the \left(\left(a+b\right)\allowbreak\left(c+d\right)\right) formula features two additional defects: The outer parentheses are not any larger than the inner ones, and the space between the inner parentheses is excessive.

Do study the fourth formula as well: Not only does it not feature a line break after the + symbol, the spacing around the + symbol isn't reduced (because TeX isn't allowed to do so inside a \left...\right construct!). As a result, this formula too has the potential to generate an overfull line, whether the formula occurs at the right-hand edge of the text block or somewhere in the interior of the line.

Not the answer you're looking for? Browse other questions tagged brackets delimiters or ask your own question.