Why can you not skip lines in document when providing optional environment parameters with xparse?

Is it intentional that you cannot skip lines when using optional environment parameters with LaTeX3's xparse?

It seems that you can skip lines with mandatory parameters. 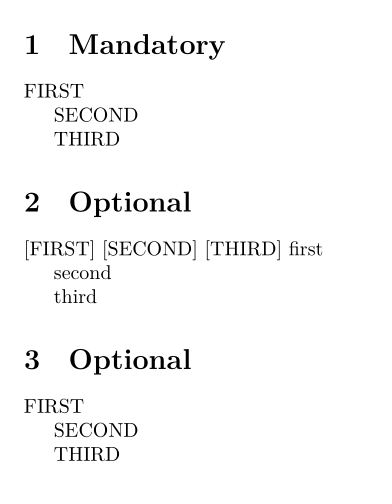 It is intentional, but, as far as I know, there are still discussions about it.

The problem appeared several years ago within amsmath, when something like

was considered. With the default LaTeX setup, this triggers an error (Missing number, treated as zero), because \\ would ignore spaces when looking for its optional argument. So the developers of amsmath decided to use a different version of \@ifnextchar that requires no space to intervene between \\ and its optional argument.

A similar approach is used in xparse, but only for environments, as far as I can see. So

would turn out in bad output only for the second foo environment call, where

A workaround, not a recommendation, would be

Not the answer you're looking for? Browse other questions tagged latex3 xparse parameters or ask your own question.