What packages help with typesetting settings specific to religious books?

I'm looking to reprint and publish older religious books from the 19th century and earlier.

Such books usually have features not typically found in most books, and I'm finding it difficult to manually reproduce them using plain LaTeX features.

To give a concrete example of all these points, take these two versions of the same page:

Are there any packages which specifically help with any of these, or ought they each to be solved manually using less specific packages?

The memoirclass provides automatically \book and \chapter divisions, so the main issue is setting up the formatting to the way you like them. Verses in the bible are functionally equivalent to sections, so you can use the \section for your verses. But since you can rename commands easily, you can create a \verse command that is \section underneath, and keep the markup semantic.

Here's a mockup of the Bible to get you started. Since it is likely that you will be using nice fonts, I would compile this with XeLaTeX or LuaLaTeX, which allows you to use any OpenType or TrueType font on your system. (Make sure your source file is UTF-8 encoded.)

The standard \book command starts a new page, so you would need to change that appropriately. I haven't added anything for the header/footer, but you should be able to do that yourself by following the memoir manual.

The code the the margin number is adapted from the memoir manual. I have added code in the \printbooktitle command to save the name of the book so that it can be reused in the \chapter formatting. Finally by using \let\verse\section we can keep the markup semantic: \verse is now identical to whatever \section. 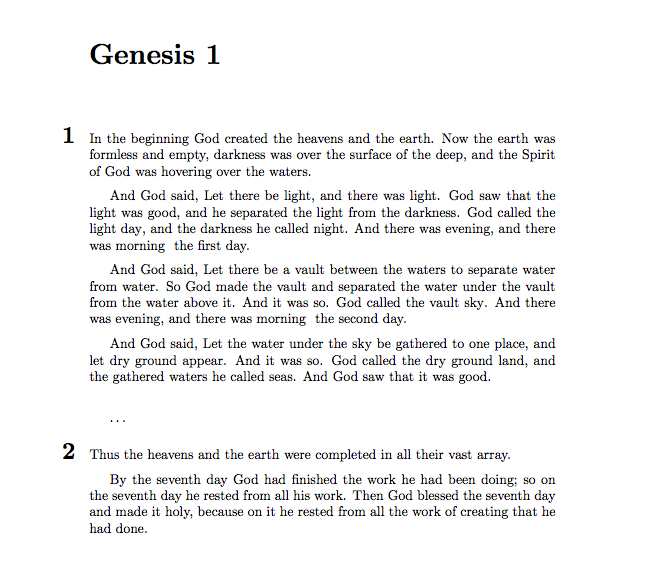 Not the answer you're looking for? Browse other questions tagged packages memoir book-design or ask your own question.

27
What are good packages for laying out a play?
60
Are there any good general typesetting books / references?
4
How to replace chapter boilerplate with full-page image?
15
meta packages and typesetting
2
Indent pagenotes with multiple lines in memoir
1
How to customise lower level heading titles when using the memoir class? (Or: is titlesec still incompatible with memoir?)
2
What is wrong with my packages?
2
What packages are included with MacTex?
0
What are some good templates for books that are similar to dictionaries?
0
(Done) How to make effects in chapter sheet design and sheets decoratives