How does beamer build the frame?

I've started to write my own theme for beamer. I'm bored of the default ones and I thought it might be a nice challenge to make something that looks good. The problem is that the beamer documentation doesn't really offer much in the way of explanation of how to write your own themes. It explains a little about what \defbeamertemplate does, but it doesn't explain, for example, that to customise the frame title you need to set up your own templates for frametitle and headline. I had to work this out by looking at what the default themes actually do.

So my question is quite general: how does beamer build the frame? What template entities do I want to define to customise how beamer looks? And what does beamer actually do with them?

Here's half an answer.

The reason that it is half an answer is because of the way that beamer builds a frame. In essence, the stuff on a frame can be divided in to "frame" and "content". The "frame" component is actually typeset by hooking in to the headers and footers bit of TeX's output routine. This ensures that it goes behind the actual content. The "content" is then rendered afterwards. The "frame" component consists of all the stuff like backgrounds, sidebars, and so forth. Interestingly, the frame title is part of the "content".

What I've worked out so far is the order in which the "frame" stuff is laid out, and (mostly) what it consists of. To follow the trail, you need to look at the definition of \ps@navigation in beamerbaseframecomponents.sty and search for everywhere it has a \usebeamertemplate (though you have to be on the lookout for calls to other functions that also call templates).

Exactly what each piece is and how it is to be used is covered in the manual (section 8.2) as Matthew says, but that doesn't tell you the order (well, not obviously) and on the basis that a picture is worth a thousand words anyway, I thought that the following pictures might help.

First, a frame itself: 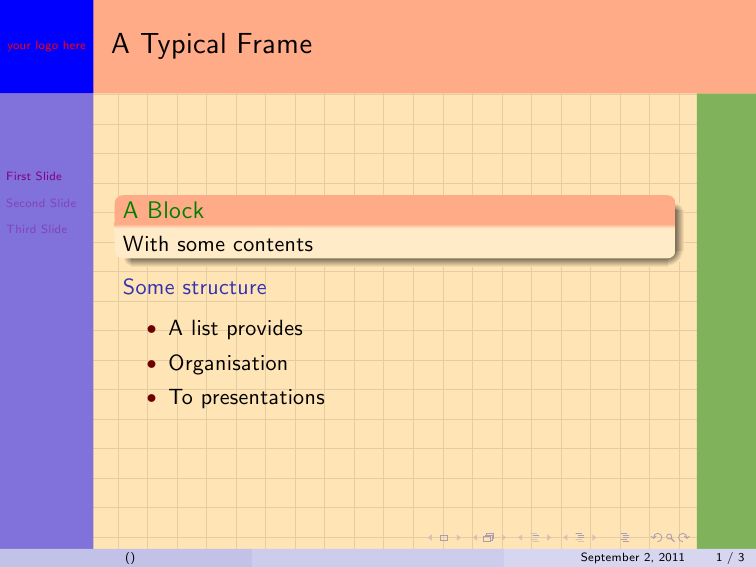 And now the exploded diagram, at least as far as the "frame" part goes. 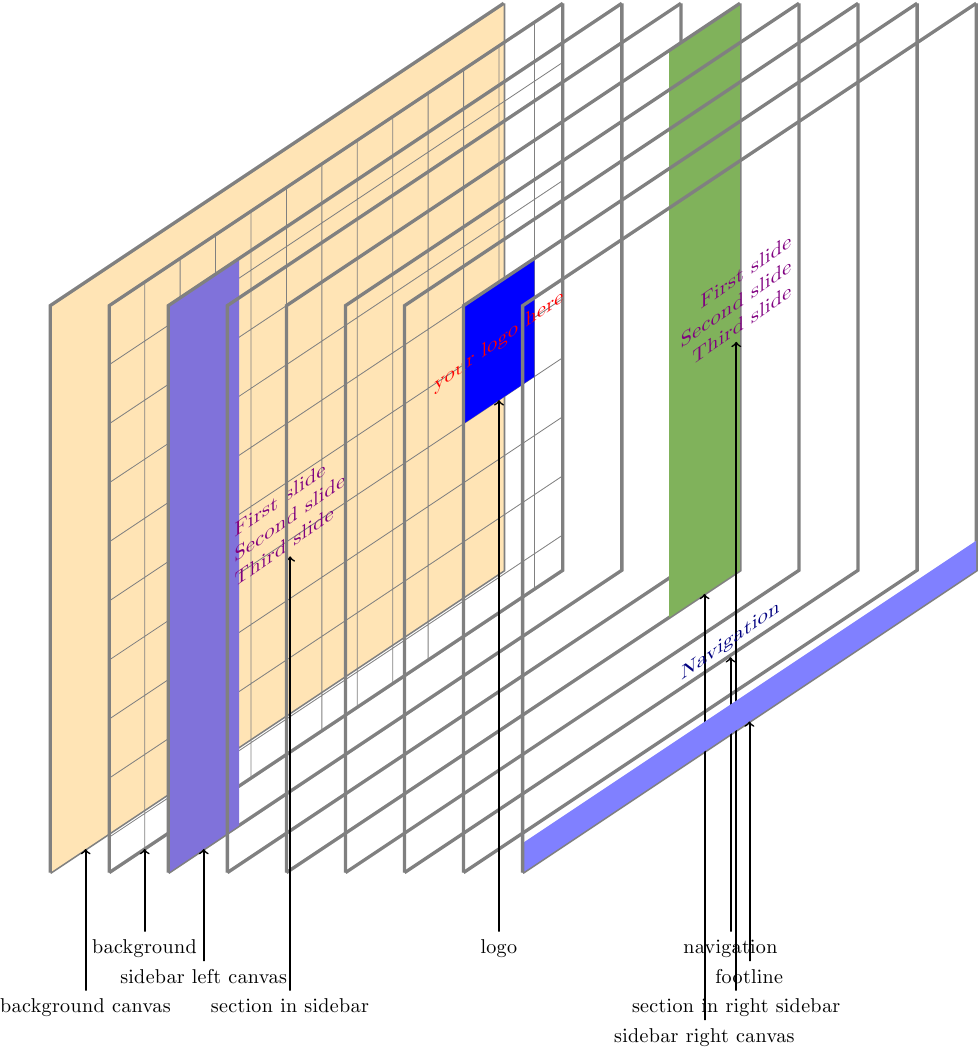 It's not quite the same as I didn't take apart the templates and reuse them, but hopefully each bit is unique enough to show what it is.

With regard to the content, then there's less need to do the "explosion" because stuff tends not to get put on top of other stuff, so then it's just a question of knowing what can go in to a frame. The exception is, perhaps, the frame title which one could consider as part of the "frame" part but which, by reason of implementation, is in the "content" part. So for that, reading the beamer user guide is probably as good as you're going to get.

I shan't put the code for doing the above. It isn't pleasant! Nor is it readily adaptable to other situations.

Not the answer you're looking for? Browse other questions tagged beamer or ask your own question.

238
Design a custom Beamer theme from scratch
29
Is there an overview of Beamer's slide (page) geometry anywhere?
15
Using TikZ to design a beamer template from scratch
12
Overlay an Entire Slide with a Semitransparent Rectangle in Beamer
14
Showing margins/frames in beamer slides
4
How to create Beamer template?
5
Change Beamer frame background between slides in same itemize
7
What is difference between template's `background` and `background canvas`?
6
beamer: Difference between \setbeamertemplate{background canvas} and \usebackgroundtemplate (and \setbeamertemplate{background})
2
Place logo inside footline zone in a beamer presentation
See more linked questions

3
Beamer: Vertical shading + plain frame leaves white strip at top of page
7
Beamer customizing headline
22
Custom headline in LaTeX Beamer?
0
Beamer theme with different frame types
3
How to move Beamer headline below frametitle?
2
How can I add the section in the headline of the default beamer template?
5
Beamer custom template: Simple head- and footline and a title page
2
Removing the title from the frame footnote in personalized Montpellier beamer