A series of diagrams in the list of figures

I have a number of diagrams (right now 8) that depict different stages of an algorithm, each in its own figure environment together with a caption and a label I am referencing in text (the description is quite lengthy, currently it has 6 pages). However, the pictures are quite similar and it is silly to put them in the list of figures under short-captions like "Algorithm 4.2, step 42".

I am looking for a solution that won't put a number of similar entries in the list of figures, but will still allow to reference at least the first diagram, and will make the all of them feel like a part of a series.

For example we could number the diagrams like subfigures, i.e., "Fig 4.2a", but keep them in different figure environments, and then put only the first one as "4.2" in the list of figures.

I don't really know how to make it appear nicely, so I'm open to different solutions as well. Thank you for your help!

(I'm not providing a minimal example because it would be quite lengthy and it wouldn't contain anything special. Yet, if you want me to provide one, I will edit it in.)

I don't think that adding a range such as "Fig 4.2-4.9" in the LoF is a good idea since it might be ambiguous unless all eight figures appear on the same page (the one that will appear in the LoF). Trying to circumvent this using a page range in the LoF might be even worse, since it might be possible that no float appears in one of the pages of the range.

Here's one proposal to do it using \ContinuedFloat from the caption package. Only the "main" float in the a series of steps will produce an entry in the LoF; the use of an empty optional argument for \caption in the continued floats for that series assures that no entries will be produced in the LoF. One could additionally declare a special label for the continued floats (in my example code each one of them has a label of the form "Figure # (Cont.)" but you could change this to suit your needs) to clearly specify that it is the continuation of a series. 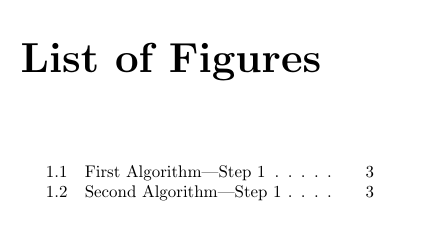 And the page containing the steps of the algorithms: 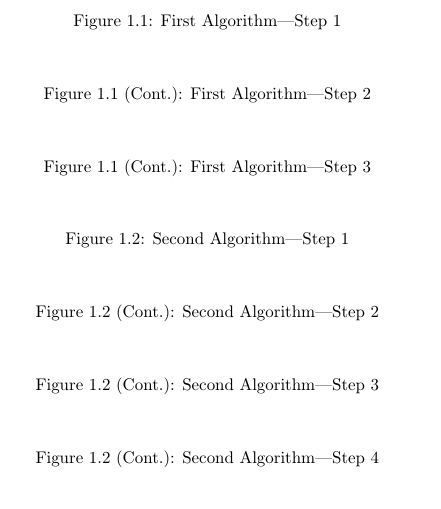 Not the answer you're looking for? Browse other questions tagged table-of-contents floats captions or ask your own question.

8
Replicate Figure w/out Inserting New Entry in List of Figures
8
Have some figures show up in two listofs: list of figures and list of special figures
8
The line spacing in the list of algorithms
3
Is there a way to put subheadings(for maps) in the list of figures?
4
How to remove captionless-figures from the List of Figures (LoF)?
2
Multiple Figure Numbering and Multiple Captions for Figures
3
Side-by-side minipage figures captions too close together
0
How to make subfigure letter (a, b, c, ...) colorful in the text as referenced figures?