How to type a non-breaking hyphen (dash, "-" character) in scientific or technical documents

I am writing scientific or technical documents in LaTeX. Often I need to type a non-breaking space, for example when using equation references:

Is there a way of inserting non-breaking hyphens?

For example, this may be useful for technical terms such as Runge-Kutta, non-linear, non-converging or Van-der-Pol Oscillator which would not usually be split over lines.

Additionally, this may be desirable for citations and Author names, or publisher names.

If you use the amsmath package, you could employ its \nobreakdash macro to insert a dash or en-dash after which no line break is allowed.

Three examples (all from the user guide of the amsmath package):

The joined-up expression $n$\nobreakdash-dimensional is quite long and might create bad line breaks. To keep this from happening, while still prohibiting a linebreak after $n$-, you could write

That way, if need be, LaTeX can find a line break somewhere inside the "dimensional" substring. Presumably, you're OK with $n$-dimen- being at the end of one line and sional at start of the next line. If you have a lot of instances of "n-dimensional" in your document, it may make sense to set up a macro such as

in the preamble and to write \ndim{} everywhere in the body of the document.

With the babel package loaded there is \babelhyphen{nobreak} available (alongside \babelhyphen{soft}, \babelhyphen{hard} and a few others). While it prohibits a break after the dash the following word may still be hyphenated:

The language ngerman (maybe others, too) defines a shorthand for a non-breaking hyphen: "~. With \addto\extrasenglish{\languageshorthands{ngerman}} it (and the other ngerman shorthands) can be added to english for example. (It probably must be activated with \useshorthands{"}. Contrary to \babelhyphen{nobreak} "~ does not allow the following word to be hyphenated.

You can also define the shorthand yourself – either general

or explicitly for one language (english as example): 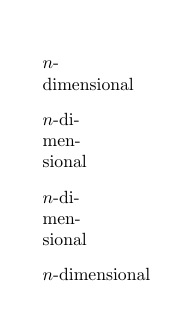 It is also possible to wrap part of text that should not be wrapped or only the dash in \mbox{…}:

Not the answer you're looking for? Browse other questions tagged symbols hyphenation or ask your own question.

4
How can I type the "EE" character?
8
How do I type a Chinese dash in XeLaTex
2
How to get double dash or double hyphen in bibitem?
3
How to type special character-- a Y with a line through it
0
How to type the | character of the normal size in text mode?
3
How to center header and numbers in a scientific table and hyphen between numbers