How can I control the space above a section heading in the memoir class?

I'm using the memoir class to typeset a cassette cover with some lyrics in it. I'd like to section headings to be very basic, just with a lineskip above and under them. But it seems that there's more vertical space added above each section heading (see image).

Where does this space come from and how can I control it? 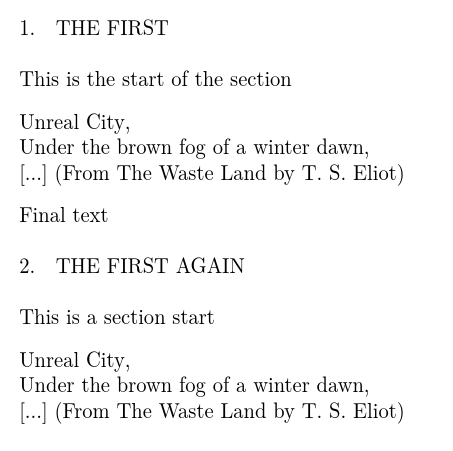 Note that this may increase the number of bad page breaks you get as it reduces LaTeX's ability to find good break points by greatly reducing the amount of stretchiness in the vertical spacing.

Note that the remaining vertical spacing has nothing to do with the sectioning: the alltt environment add vertical space at the beginning and end. This is independent of Memoir.

Not the answer you're looking for? Browse other questions tagged spacing sectioning memoir or ask your own question.