How to check if a macro expands to one of several strings?

I have the following problem: I am using the etoolbox package to check if a macro (say, \foo) expands to one of several possible strings (say, bar, baz, abc, or other). I need to execute different code depending on what string \foo expands to.

My current solution is

Although this works, it is not satisfactory due to the deep nesting, and it doesn't generalize well to longer lists of possible strings. In my real situation, I have up to eight possible strings to check, so this solution creates unreadable code.

My question is, what alternative options (in LaTeX2e) do I have to check if a macro expands to one of several strings?

Ideally, the solution would also work for other etoolbox comparison commands (e.g., \ifstrequal). However, the solution need not use the etoolbox package.

If \foo expands to a simple string, which survives a \csname, the following method can be used, which does not need LaTeX3:

The best solution I can think of is expl3’s \str_case:nnTF. Here I generate a variant to take one token instead of a test string and compares to expansion of that token to the list. If no match is found in the list an appropriate message is output.

It's quite easy with xparse and expl3:

The optional argument is for what you want when there's no match (default value, do nothing). 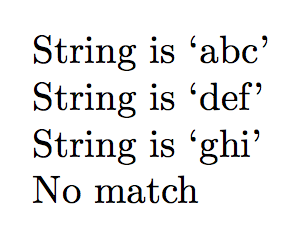 The simple minded method from my other answer avoids nesting. Here we don't have TeX like \if..\fi but suitable wrappers, so we need to modify a bit the definitions.

Remark: once a test is positive all successive ones are skipped, due to the definition of \DoThis macro.

Not the answer you're looking for? Browse other questions tagged conditionals etoolbox or ask your own question.