In the following example the \- in the footnote doesn't work. In Indian languages "dh" is one letter and should not be separated by hyphenation. I know I could use \discretionary here, but I want to understand why \- doesn't work. I have many cases like that.

Switching to bigfoot for the footnotes is not an option either, as the result looks very different, and not good: (just changed manyfoot for bigfoot in the above example.)

Update: This problem is not a problem of manyfoot only. I was now able to reproduce the same problem also with bigfoot, see below:

With polyglossia language set to sanskrit and script option set as [script=Latin], I can't get dh to hyphenate, whichever combinations of text widths, fonts and arrangements I try. 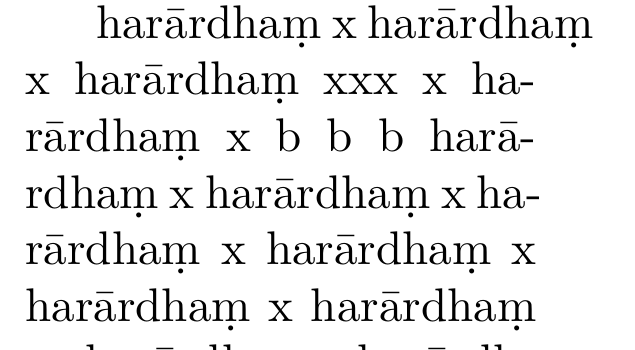 Is there a test file with more extensive cases, to try out all the hyphenations?

The question didn't say explicitly, but the point is that an explicit discretionary hyphenation (\-) should suppress automatically chosen hyphenation in the word.

This is a general problem with xetex having some sort of "optimization" in which it throws away the discretionary information in the typeset words as it formats a paragraph: the hbox lines for the formatted paragraph contain no discretionaries, but the characters chosen from the discretionaries while breaking the paragraph into lines. If such a box is captured and emptied into another paragraph, xetex treats it like pristine text that gets hyphenated afresh, whereas TeX (and luatex and pdftex) retain the original discretionaries (and more discretionaries may be added in the second pass through paragraph building).

Here is a demonstration that shows the difference between the engines

I noticed this some time back when XeLaTeX caused magaz.sty to break.

The solution in this case is to avoid xelatex, which also necessitates avoiding xltxtra and xunicode. Try it with lualatex instead.

Not the answer you're looking for? Browse other questions tagged hyphenation bigfoot manyfoot discretionary or ask your own question.