Whose responsibility is it to load fonts in LaTeX (or XeLaTeX)? (and how do I know which ones, if mine?)

I ran into a headache-inducing problem with LaTeX (actually I used XeLaTeX to compile, but I think this issue is independent) recently due to unwittingly attempting to modify the dimensions of a math font before it was loaded.

What should be my expectations?

Based on the answer to this specific question, I would like to determine standardized programming practices. What is actually the standard for LaTeX and package writers (should a package always include a font check)? Should a bug be reported for any of the steps 1 through 4?

I am aware of what this message means. pgf (TikZ) switched to math mode before executing the baseline key, which included modifications to a font (the math font), that has not yet been loaded. I am aware that since the implementation of LaTeX2e, fonts are not longer loaded until they are needed. fontspec loads fonts immediately (correct me if I am wrong).

Strong words (that gave me and my colleague a laugh. This guy surely knows what he is talking about!) from Ijon Tichy about the changes in LaTeX2e since LaTeX 2.09:

Translation: One must be aware of the fact that tfm font files in LaTeX are only loaded when they are first needed ever since NFSS2, or most recently since LaTeX2e. The AFAIK was implemented differently in LaTeX 2.09 (than in LaTeX2e). In LaTeX 2.09, fonts were loaded directly through the \font instructions within the format as well as the document preamble. Therefore, packages that use a LaTeX 2.09 coding style could potentially cause problems in LaTeX2e.

One can explicitly load the math font.

I would like to add a note about my discoveries while narrowing down the problem. I had two versions of the same document, one written in German and the other in English. The English version was typesetting fine. The German version would not typeset. I discovered that there was a footnote including a \url{} in the English version that was commented out in the German version. This \url occurred before the first \ampel call. This means that \url{} loads the math fonts.

Before you use \textfont2, you must ensure it has been defined, which it is only after LaTeX has typeset at least one formula, even an empty one, in the current font size. This is because it wants to support math at any font size and also to avoid wasting math groups.

The command that's actually in charge of defining the math fonts given the current conditions is \check@mathfonts:

Using execute at begin picture is not good, because the optional argument is evaluated before the picture starts and that hook examined. And no, just doing \sbox0{$$} at begin document (adding \null is irrelevant) is not sufficient, if you plan to change font size in your document: for instance your \ampel might go in a section title (with \protect in front of it, but this is another matter): try with that method and the result in the second case, after \Huge, would come out wrong. 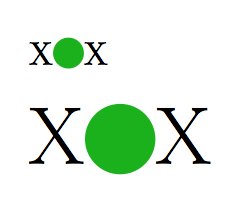 If I may contribute my own answer, based on comments to egreg's answer by Joseph Wright:

Whose responsibility is it to load fonts in LaTeX (or XeLaTeX)? (and how do I know which ones, if mine?)

\textfont2 is a primitive, therefore a check must be implemented by the user to see whether a font has been loaded or not.

Not the answer you're looking for? Browse other questions tagged tikz-pgf fonts xetex fontspec or ask your own question.