I'm just starting to experiment with indexes, not very successfully yet. I am getting lots of duplicate entries, I suppose because of hyphenation. See my example below, which I've made from a grep of my real file, in which, for "Artha-śāstra", I particularly made sure that I took the first occurence of it and copied it over the later ones, the file having been written by two authors with the theoretical possibility of different unicode characters being used for the diacritical combinations. Looking at the idx file it seems that the two instances in which the discretionary hyphen is actually used it gets expanded to \indexentry{Artha\discretionary {-}{}{}śāstra@\textit {Artha\discretionary {-}{}{}śāstra}}{1} whereas in the other ones it is just \indexentry{Artha\-śāstra@\textit {Artha\-śāstra}}{1}. But maybe it's something else. 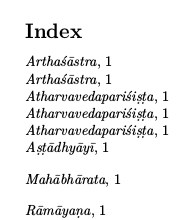 the \- in your entries is definitely the cause of multiple listings, as you conjecture.

as you observe, in the .idx file, some of the entries contain the string \discretionary {-}{}{}. these are the entries that are input in footnotes, and this is caused by the expansion that takes place while processing a footnote.

if you can avoid placing index entries in footnotes, instead entering them just before the footnote, you should get better results.

the same thing would happen with such an index entry in a section heading or a caption, any place that is in a "moving argument" (i.e. one saved for later reuse in a different location). while the argument of \index can be considered a moving argument, it gets special treatment -- but only after the context in which it appears has been otherwise processed.

Not the answer you're looking for? Browse other questions tagged indexing xindy or ask your own question.