Context: I'm typesetting a songbook in which there are occasionally "chords" typeset above one word, i.e. if I type someting like

I have no difficulty doing that with essentially a combination of \raise and \hss. However, sometimes, when the \chord commands are too close together, the chords are typeset above one another (normal, they occupy no space):

When I typeset this, the Am, B7m and C7 overlap to some extent.

My question is then: how can I make sure they don't overlap ? In other words, I'd like to insert a space before the chord is typeset long enough that it is positioned after the previous space has been flushed.

For the record, the definition of \chord is

My suggestion would be to change the input slightly. That is, instead of just supplying the chord to the macro \chord, supply the chord and the letter coverage: 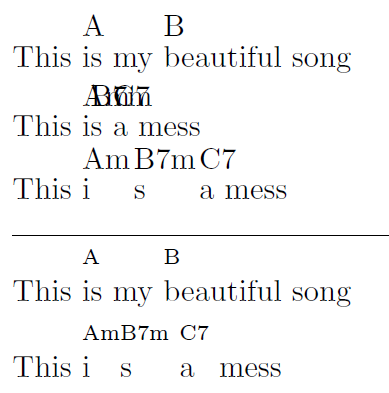 The tabular structure will expand to fit the widest length (chord or letter).

11
biblatex/multicol: Incorrect vertical space after bibliography heading
5
How to reduce distance between two columns?
7
Using a half-space with abbreviations in cleveref?
11
Chords & lyrics, songbook
7
How do I get consistent spacing around an mbox?
5
How can I control the space above a section heading in the memoir class?
2
How can I have the appropriate distance between two theorems?
1
Automatic word spacing for long chords writing