How to hide a part of a latex file?

I would like to have a generic command that basically reserves space for a set of commands, without actually rendering them in the PDF.

For example, \hide{this is some hidden text} will allocate space in the pdf for that string, but will never actually print it -- it will be just white.

Or alternatively, it should also work with \hide{\includegraphics[width=3in]{image.png}}. If there is no way to do it generically, I would at the very least want to know whether I can do it with the includegraphics command.

There are several different questions here so I am going to address only the main one which appears to be the hiding of specified graphics. It is presumed that the image file exists (and has a particular dimension) and the aim is to produce either a space or a placeholder that would be the same size as would be produced, while at the same time not making the image available to the reader. This could serve the purpose of reducing file size in a draft, or acting as a placeholder for an incorrect image. You could do something like the below, measuring the image and then inserting a tikz node in its place. By altering the code you could remove or alter the text inside, and remove the border at various times. 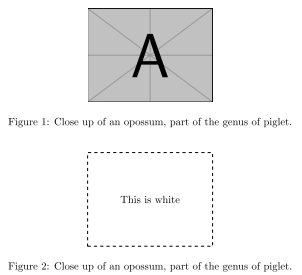 If you want hide pictures to speed up compilations in a PDF preview or save ink cartridges in printer test, but a completely empty space is not essential, then the most simple method is use the draft option in the graphicx package to obtain only a frame with the name of the image.

And may be too obvious, but for most common texts without colors and without brackgrounds, is worth to note that an easy method could be use a white color. As simple \def\hide#1{\textcolor{white}{#1}} to hide and \def\hide#1{#1} to unhide. Obviously, the advantage/disadvantage of a white text with respect a true \phantom text is that you can still select and copy the hidden text in the PDF viewer.

I know I'm late to this, but I think I found a good solution when trying to figure out the header for my resume.

The following command works to create a blank \raisebox with the dimensions of the input. It works for single-line text and \includegraphic commands, including wrap-text instances like the wrapfig package offers.

Note that you'll need the xspace package in order for the command to act like the given image or text with respect to surrounding spaces.

Not the answer you're looking for? Browse other questions tagged spacing rendering or ask your own question.

261
How do I create an invisible character?

16
Trimming whitespace around text (like LTRIM, RTRIM and TRIM)
2
How can one produce spaces of arbitrary (fixed or relative) width that (do or don't) linebreak?
11
Whitespace that breaks across pages (e.g. for handwritten answers)
2
Distortions caused by LaTeX?
19
Which commands consisting of a non-letter eat spaces afterwards?
6
Hex renderer in LaTeX
24
Acrostics in latex (how to hide a message)
12
How to NOT render a part of a document (pure LaTeX)