I'm trying to write a short explantion of the quantities in a formula but I think the kerning doesn't really work. (or I'm wrong?)`.

The image shows the MWE with cm as well as minonpro but it seems like the kerning ist worse in mminion. 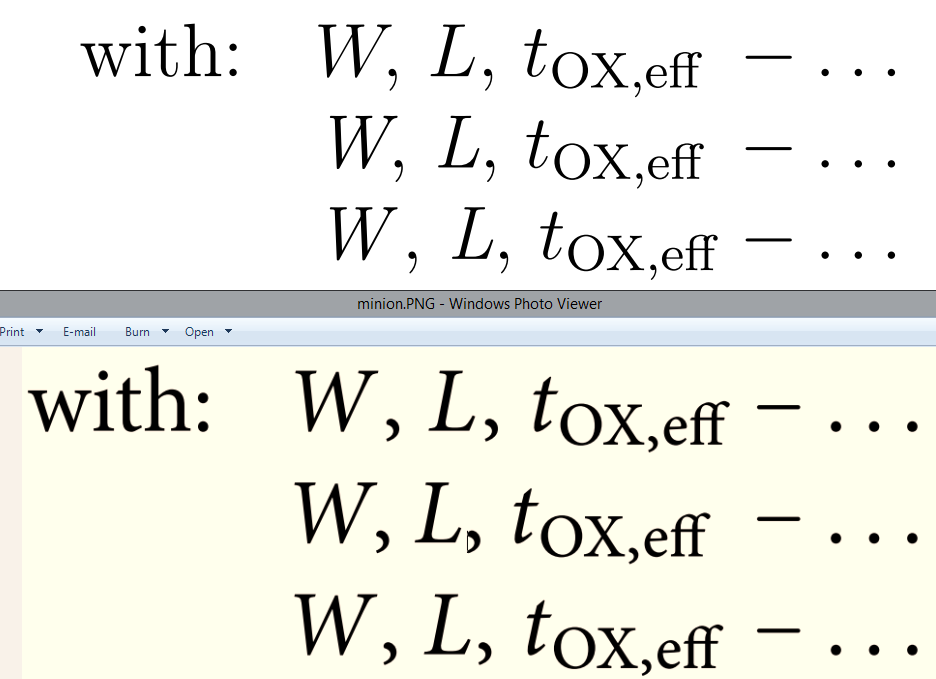 I'll analyze the case of Computer Modern, because I don't have Minion, with the following input file:

The first kern is the italic correction, that TeX adds after an ordinary symbol, if it has one defined, the second one is the kerning between W and comma, as defined by the font.

The two characters are typeset in the text italic font, with no kerning because there's none defined between them.

TeX adds the italic correction for W, as in case 1, but there's no kerning because the two characters are from different font. With $\mathit{W},$ (which is more correct), we'd get

No additional box is used, because \mathit involves only one character.

We see a semicolon where a comma would be expected, because the math comma in a font under the OML encoding is in the place of the semicolon: the math code of the comma is "613B, which means punctuation (6), from math group 1 and slot 3B (which in ASCII is the semicolon).

What happens with Minion?

The Minion font has, as far as I know, some very dramatic kerning between letters and punctuation (for instance the apostrophe). This shows very well in case 2, where text mode, rather than math mode, is used. In cases 1 and 3, the kerning is absent possibly because the W is taken from a different font than the math letter one, so case 1 and 3 are essentially the same; one should examine the math font setup in MinionPro.sty and the font metric files to know precisely: it's very possible that the package defines math italic just as text italic.

What should be done?

The input should be $W$, $L$, $t_{\mathrm{OX,eff}}$, because these are three distinct formulas and the commas are textual, not mathematical.

Not the answer you're looking for? Browse other questions tagged math-mode kerning minionpro or ask your own question.