Is there a way out of my small-cap conniptions?

I'm having difficulty getting small-caps to render properly in my (XeLaTeX compiled) document. I want to render a certain level of heading with a different font th at the default document font and in small-caps. The tricky part for my scenario is that I'm working with Turkish and it needs to correctly case i→İ and ı→I even for small-caps.

Here is an MWE that illustrates the problem:

My issue is I actually need something like the second format to work because I want to set my body font to Crimson.

When I do that, the example above comes out like this:

Of course the second instance is not expected to work because that font doesn't have good small-caps glyphs. But the second example needs to work.

I've tried a number of combinations including using \scshape instead of the open-type font feature, setting the font inline instead of setting up the face ahead of time, etc. In no permutation was I able to get the main font to be Crimson and still set some headings using Libertine Serif with Turkish small-caps. What am I missing?

I'm not quite sure that I understood your problem. But imho you are simply missing the language setting in your \reffont: 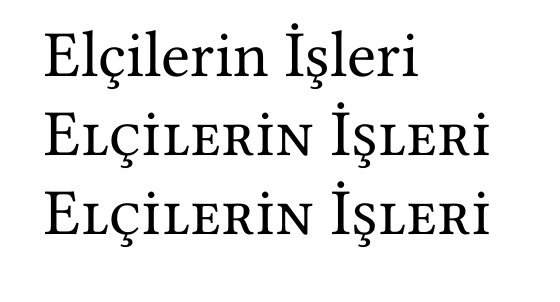 Not the answer you're looking for? Browse other questions tagged xetex fontspec polyglossia small-caps opentype or ask your own question.