When I use newcommand with no argument, I get expected behavior. When I add an argument to my command, latex adds an extra space. Here's an example:

This code returns the following:

I.e., there is an unexpected space at the beginning of the second line. Is this intended behavior? If so, I'm curious about why? How would I restore expected behavior with an argument?

Thanks for any advice!

The definition with argument can use \ignorespaces at the end of the definition text to prevent that the following space matters in horizontal mode after \noindent: 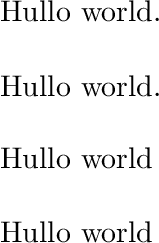 \par ends the paragraph, current mode is vertical, where spaces are ignored. The space after \par is already ignored as it ends the command token. There are two kinds of command token, which start with a backslash:

In the first case, a following space is ignored, in the latter case it is not, because TeX already knows, that the name cannot contain more characters.

The space after \vspace{#1pt} becomes a space token, but it is ignored, because TeX is still in vertical mode. The mode is now changed by \noindent. Thus the space after \mySpace{1pt} matters and it can be seen in the output.

This space is ignored, when \noindent is followed by \ignorespaces.

BTW: #1 is expected to be a number, not whole paragraphs, then the argument can be made non-\long, which means that TeX complains during the scanning of the argument, if it find empty lines or \par tokens. The arguments of a command are made non-\long, if the star form of \newcommand is used.

327
What is the use of percent signs (%) at the end of lines? (Why is my macro creating extra space?)