I want to typeset '+1', as we would write here on TeX-LaTeX Stack Exchange.

Which is the unary operation spacing. I tried $\mathbin{+} 1$, but that didn't do anything:

Next I tried {} + 1 which did use the correct binary operation spacing, but added the spacing before the '+' sign, giving me a small leading space. I don't actually really want this, since I'm not stating what I'm adding 1 to. I want the space after the '+' sign, but not before, which I think is correct. I could add manual, visual correction, but I'm not sure what values to use and would prefer a less quick and dirty solution if one exists.

Code for above image:

You have a couple of options:

Here's it, implemented in plain TeX (just use \newcommand instead of \def for LaTeX and \mspace{-\medmuskip} instead of \mskip-\medmuskip if you also load amsmath).

In the first part I define the command: it inserts an ordinary symbol, then a math skip that counteracts the one automatically inserted by a binary atom, then + and finally 1. The three examples show the behavior at natural size, maximum shrink and exaggerated stretch.

The second part deals with the difference between \mskip and \mkern. Since \medmuskip usually holds a stretchable and shrinkable glue, it's important to distinguish between the two and the examples show why. With \mkern-\medmuskip the stretch and shrink components do not cancel and so they can act: and they do. 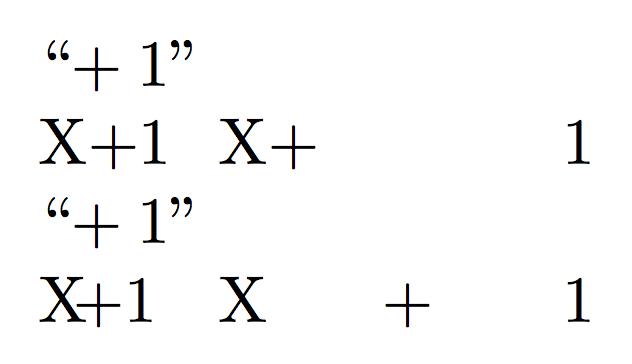 24
How to input open intervals
16
Strange spacing when putting a math macro before a binary operation
9
What is a good method for producing a unary plus/minus sign that always works?
5
Subscript spacing
6
Hyperref, amsmath, and horizontal spacing at start of a numbered equation
5
Conditionally remove the space before a one-letter operator
3
Is there a cleaner way to get the proper spacing in this alignedat?
5
Conditional whitespace in math mode
4
Custom division symbol