So I have been trying to get two mini pages, side by side, in one box with a shared center border. The best I have gotten is

I think this is not too bad, and is certainly good enough for me, but I was wondering if anybody has any suggestions, comments, criticisms? (other than obviously adding vspace at the start and end of the mini pages).

So far I have also tried two individuals framed mini pages, but Latex puts space between their space. I could remove it with negative hspacebut it didn't look quite right. I also cannot use one frame and have fboxsep > 0 because then the vline doesn't meet the frame.

I realize I can also do this with tabular and/or align, probably. I planned on having a list inside, though (not sure If I will anymore or not. Bullets and newlines seem to work alright for my purposes), which seemed more troublesome than this approach.

Also, perhaps beamer would be better to use? I am not familiar with it though (and don't have the time to look into it right now), so I did not use it

You can use a tabular with p column or a tabularx with X column. 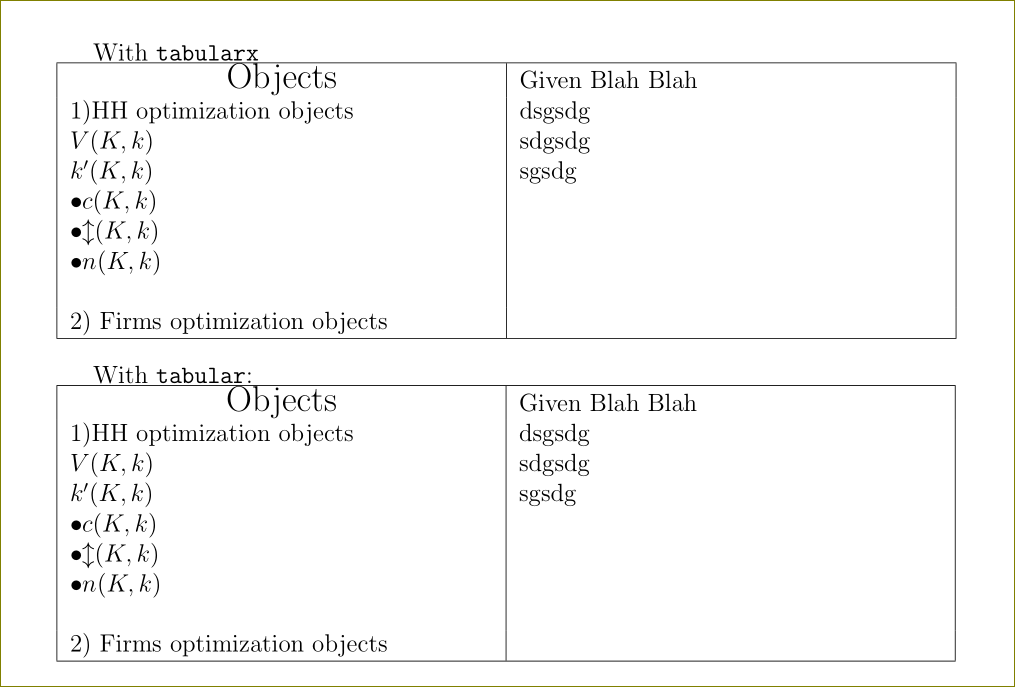 Not the answer you're looking for? Browse other questions tagged horizontal-alignment minipage tabularx or ask your own question.

4
How do I make a framed coffin with correct alignment?
4
Vertical Alignment of (graphic+text, inside a mini page)+item number
2
Two mini pages side by side vertically aligned on top
1
Create a line with text on the left border and right border
1
Continuous labels problem of the mini pages in the two figures
0
Multi pages table with tabularx
4
Getting mini pages right
0
Align a figure's border with that of the text's body
0
Text inside minipage doesn't touch the border of the page