How to draw a 3D path from points generated within tikz

Let me be specific by posting an example:

Is there a way to save the points in memory and call some "pgfplots" instruction to plot them?

Let me clarify that I do not want to plot a helix. I want to plot anything that even does not have an equation but it is a set of points that I create within TiKz.

I see that I have not been clear about this, so let me add some extra information. Please look at the following link arc between points A and B in a 3D sphere

The last plot (as at this moment) is a sphere with 5 arcs. I computed those arcs in TiKz and the code to compute them is in the post. Since each point is drawn with "node[]" it takes more than 30 seconds in my computer to process. Plots like this usually take me 1 or 2 seconds. The reason is that the code is too high level and very slow. Besides, I do not have much leverage. I can define color and point density, that is all, I would like to call a TiKz function where I can define many attributes. Thanks.

In summary two facts that I want to know are:

I found a solution to my question. This solution was inspired in another StackExchange post

Helix on a cylinder

The main idea is the use of the function "\pgfplotfunction"

Here is a piece of code:

and here is the graph resulting from it. 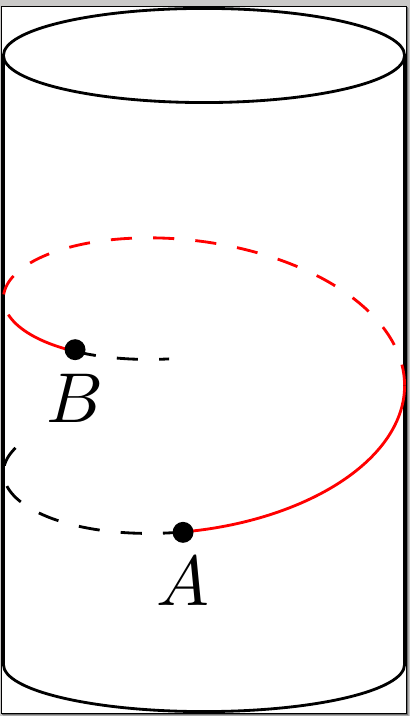 57
How to plot data from a CSV file using tikz and csvsimple?
54
How can I draw an arc from point A -> B on a 3D sphere in TikZ?
15
Helix on a cylinder
3
Save TikZ plot points calculated with PGF math library to .table file?

5
PGF: draw longitudinal arcs in 3D axis environment
12
Plot large data
2
How to plot f(t), g(t) values as a row in timing diagramm?
2
Keep path within axis
2
tikz/pgfplots - Plotting 3D surface with sphere
4
Drawing an imperfect spiral in TikZ
1
pgfplots: modify axis after end axis / cut tikzpicture after drawing
0
How to plot a colored helix whose color varies in the curve through a function?