I'm running TeXShop and I have a pretty big document - my PhD thesis. I want to do a word count with regular intervals, not necessarily every time I compile, but I want the information to be accessible if I so choose.

I've installed TeXCount (and the alternative TeXCount300) engines, and I can get them to work just fine.

However, I also use Arara to compile. I've tried changing the arara-commands to:

But then I get an error message like this:

Can anyone help me integrate TeXCount and Arara?

I apologize for the late answer.

In order to run a task, arara requires a rule to tell it how to do it, that's why % arara: texcount didn't work. So we need to come up with a rule. :)

A very simple rule to call $ texcount mydocument.tex is presented as follows (the file has to be named texcount.yaml in order to work):

It is self-explanatory, I believe. :) No arguments, just a call to texcount with the current file being processed (arara already handles file override with the special files parameter, so we don't need to worry with it in the rule context).

Of course, since I have a custom rule, I need to tell arara how to find it. Then I need to create a file named araraconfig.yaml in my home directory (/home/paulo in Unix, C:\Users\Paulo in Windows or /Users/paulo in Mac) and add the rule location to it:

And we are done! :) Let us try this new rule with a very simple TeX document, named mydoc.tex, presented as follows:

Running arara mydoc.tex in the terminal gives us the following output:

Uh-oh. Although texcount was successfully executed, I was expecting the command output in order to check the statistics. We could use the --verbose flag in order to tell arara to show what is going on under the hood:

Well, it worked, but is there a way to nicely show the output instead of this clumsy solution? Now, the sad part: with version 3.0, we might need a bit of trickery in order to make things work. You could read my answer in the following link in order to understand why I cannot exploit rules to do more complex stuff: Arara rule to delete files with wildcard

Long story short: version 3.0 evaluates rules beforehand. With version 4.0, arara now relies with a REPL workflow, but it would be unfair to talk about it since I am still writing the manual and the tool is not officially released.

I will update this answer accordingly when the new version is out.

A potential improvement is to write a wrapper script (in my example, named gtexcount.sh) with the following content (I could also suggest a bash function, as in Is it possible to write an arara rule which uses a bash script?):

(I am using zenity here, but there are other options available as well)

With a quick rule update, we can now invoke this script instead of the original texcount and a nice window will display the file statistics:

(Of course, I also did $ chmod +x gtexcount.sh in order to give it proper execution permission)

Let us try our new rule: 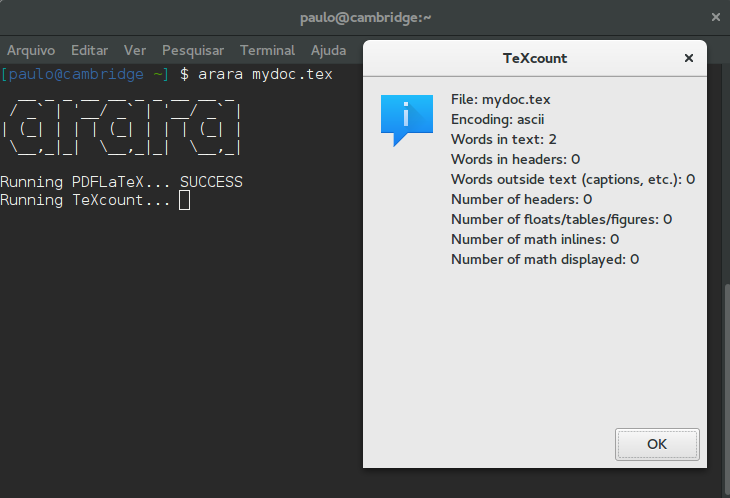 After clicking the OK button, we have everything back to normal:

Not the best solution available, but I believe it is quite acceptable while version 4.0 is not around the block yet. Hope it helps! :)

Not the answer you're looking for? Browse other questions tagged arara texcount or ask your own question.

10
Is it possible to write an arara rule which uses a bash script?
16
Arara rule to delete files with wildcard
3
Adding a new engine in TeXShop