How to reduce number of hyphenation patterns preloaded in MikTeX?

MikTeX comes with 69 languages preloaded as reported at compilation time:

I don't like this situation while cannot explain exactly why, perhaps, because in the past saving computer memory was a recommended practise.

I tried to remove unused languages though the MikTeX Options.

I unchecked most of languages on the Language tab: 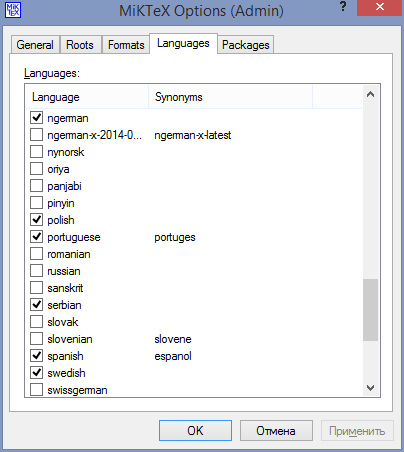 and rebuilt all formats: 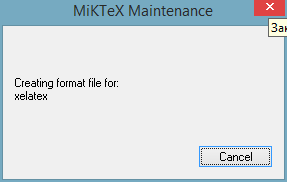 Nothing has changed. At compilation time I still saw

However running initexmf --dump from command prompt has actually removed unused languages. It seems that MikTeX Options has long-standing bug as was reported in Language (hyphenation patterns) not available 2 years ago.

A minor question is which of 4 hyphenation patterns for German language available in MiKTeX is recommended for users who (as me) load German pattern only to cite references.

With initexmf --dump you are building user formats which are stored in your user profile. With miktex settings (admin) (or initexmf --admin --dump) you are changing and building admin formats. As user formats are found first they win.

So use the user version of miktex settings to change and build them through a GUI. See also How should one maintain and update a MiKTeX installation?

Not the answer you're looking for? Browse other questions tagged miktex babel hyphenation or ask your own question.

57
How should one maintain and update a MiKTeX installation?
6
Language (hyphenation patterns) not available