Writing a word with the length of another word

Ive got a quick question: How can I create text that has the length (or all the dimensions) of another string? What I mean is:

Have latex write TEXT, but let it be printed as having the dimensions of LONGERTEXT.

EDIT: After bad wording on my side, I should clarify what I meant:

I would like to have the second line, with correct spacing by latex, not by hand.

Yeah, you can do this, using the graphics or graphicx package.

An ! in either argument of \resizebox maintains the aspect ratio of the text. 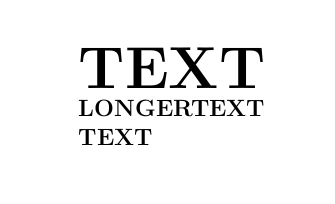 In general, I would really recommend preserving the aspect ratio. If, however, you want to keep the height the same, you can do this by using \totalheight as the second argument of the \resizebox command thus:

This is not so nice.

Added for the edit:

Well that makes it even easier, just use a \makebox

The first optional argument of \makebox sets the width and the second (here l) sets the alignment, l moves the contents of the box to the left (the default is for the contents to be centred).

I was about to offer a fun additional bit of code, for a more general solution, but I was beaten to it by A. Ellett who deserves the tick. But I thought I might as well add what I've done to give a bit of explanation:

We can define a command which allows us to set the space taken up by one word to be the width of another, like so:

So what I've done here is define the command \stretchy which has two arguments. The length \firstword is given the width of the first argument by:

A box is then made which has the width of the first word, with the second word as its contents:

A box is treated by LaTeX as one large letter of a predetermined width, which means it leaves only as much space as the width of the box. What this means is that if you set the width of a box to be shorter than the width of its contents, the contents will overflow. Thus: 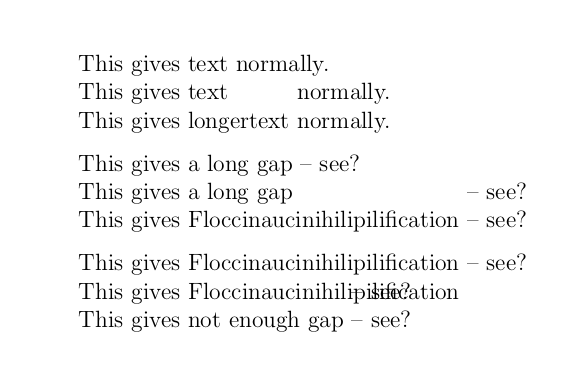 Perhaps this is more what you're looking for: 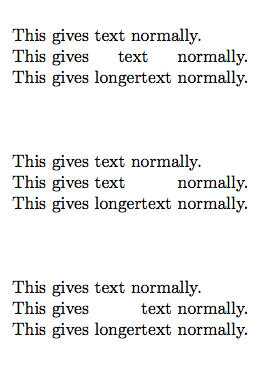 The control sequence \matchlength takes three arguments. The first is optional and allows you to select how the text is to appear within the space it's being set with in. The second argument is the string itself. And, the third argument is the text which determines the space you want to use.

Quite simple with calc: 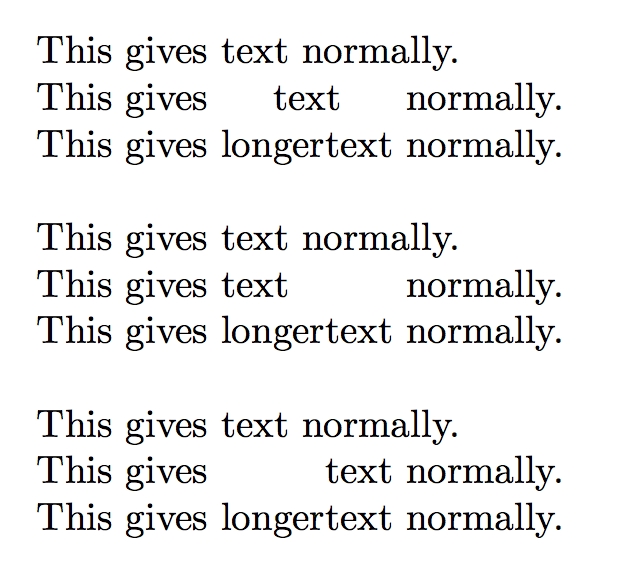 4
Math mode spacing (or glyph bounds) with mathspec
13
Best practices for spacing regarding fractions and roots?
11
Math Spacing in the presence of a trailing/non-trailing comma
4
How can I move an equation without affecting the label?
5
Vertical spacing for writing answers
1
Latex figure next to text and text align right
6
Writing out calculations in LaTeX
2
Controlling the spacing between theorem environment and standard text