Currently I am trying something that should be possible, but I cannot figure out how to make it work. I'm using alignat to make a 2-point align for the entries of five lines of math-code. I want to place a curly bracket on the right side spanning the vertical space of the last four lines and at the tip of the accolade put some math symbols.

On the left side, the curly bracket can be done in cases mode, by using

However, this only seems to work outside an environment like align. I have come across the rcases environment, which does give me a curly bracket to the left, but it can only span the whole aligned block, not a part of it.

I have tried to work with \left. in the second line and then placing a \right} at the end of the fifth line, but then alignat goes bananas. The \left \right declarations cannot work across multiple lines, unfortunately.

Does anybody have a solution for me? Maybe it is possible to define a span of several lines as 1 object that I can then give a curly bracket?

In the end I would like to add four more lines of aligned equations inside the same alignat environment that get a new curly bracket on the right with some different symbols.

I propose one of these layouts, with the drcases environment from mathtools:

is this what you're looking for? 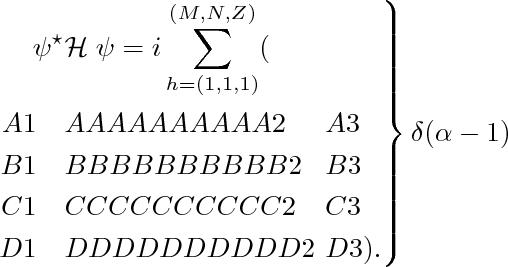 Not the answer you're looking for? Browse other questions tagged cases alignat or ask your own question.

4
Error typesetting large bracket with multiple lines
4
Center some lines within an alignat environment nested in subequations environment
1
Cases with brackets instead of curly brackets
4
Alignat with "mixed" left-right alignment
4
How to have two separate right curly bracket in align or equation environment?
1
When using a function cases, I only get the curly bracket for the first line, how to resolve the error?
2
switch between left and right alignment in multiline equation
3
alignat not aligning properly with two &
1
Right-aligning the middle column with alignat