\if-statement to know whether a new chapter has been created

I am trying to create a conditional function to determine whether a new chapter has been created (for a different purpose than that of the MWE). So far I have been unsuccessful, despite having tryed different things.

The expected output for this MWE is:

The command \ifnewchaptercreated returns "New chapter: Chapter 1" if called for the first time in chapter 1, and "Chapter 1 already created." if called more than once. Then, if the command is called in a new chapter, it will write "New chapter: Chapter 2" when it is called for the first time, and "Chapter 2 already created." all the other times.

Here is an abridged version of what you're trying to achieve: 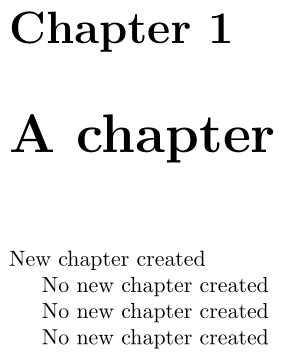 The approach is to "intercept" \chapter and set a condition - \ifnewchapter - to TRUE. Then, upon the use of \ifnewchaptercreated, we check the conditional and reset it accordingly.

You can use the etoolbox package to

Here is how to do that

Not the answer you're looking for? Browse other questions tagged conditionals or ask your own question.

14
biblatex: is there a command analogous to \ifciteseen but within one page?
4
Glossaries package: ignore \newacronym if acronym has been defined before
14
How do you test whether a known key value has been set in pgfkeys
1
Conditionally change font color of number passed from pythontex
7
Defining a command that conditionally defines/checks for counters
1
Access specific glossary fields without triggering first usage
5
How to change the output of a command if it has been called already?
4
Reset counter via macro with \ifcase in Plain
3
Boolean test for whether float has been moved?
1
Setting a \newif to false ignored on first check in custom itemize environment