I have ran into really funny trouble trying to use \overset and \mathbb the same time. I need to do something like this:

You need to put the T inside the overset: 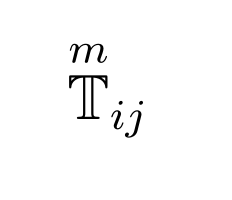 While the accepted answer provides the solution, I wish to address the "Why?" issue in the question.

The \mathbb alphabet is defined by amsfonts.sty as

which basically means "use the glyphs from the font AMSb" (which is also declared by amsfonts). The font AMSb contains the blackboard-bold capital letters and a whole bunch of other symbols. So when you type \mathbb{T} you obtain what you expect; but \mathbb{m} looks for the glyph in the slot "6D, which is not a small blackboard-bold m (it doesn't even exist in AMSb) but rather the symbol \gtrdot, thus explaining the weird result.

0
Math in the Document title
1
Why does \mathbf work with minuscle letters but \mathcal does not?
1
mathbbol displays incorrect symbols

1
Combining \operatorname with \mathnormal and \mathrm
6
Placement of an apostrophe after a sum
4
Double superscript error in fractions
3
Make paired delimiter with prefix for Re and Im
1
\def, math, and order of operations, expansion?
0
I want the same vertical space between a paragraph and an equation as there is between a paragraph and aligned maths, how do I do this?
10
How to put a symbol above another
0
How to define \newcommand for mappings efficiently
8
Why does \mathchoice mess with my redefined superscript?
2
horizontal alignement (leftalign kind) with underset/overset