Detexify-like service where I can paste a symbol

With detexify, I can draw a symbol and find code to reproduce it in LaTeX.

Suppose that I already have the symbol ∀. I could mimic its shape by drawing it by hand into detexify, and if I draw it well it would probably find what I'm looking for. But it's a bit of a roundabout way. Is there a service like detexify that looks for LaTeX code to recreate symbols, not based on a drawing but based on the actual unicode character?

has the Unicode name of all the characters in Unicode 8, and I just extended it to give the entity names as used in HTML (and MathML and ISO entity sets) and also TeX names where known. The TeX names include the (matching) names used by the stix package (making the stix fonts available to classic tex) and the unicode-math package (for xetex/luatex).

For the characters mentioned so far in the comments on this page, it produces 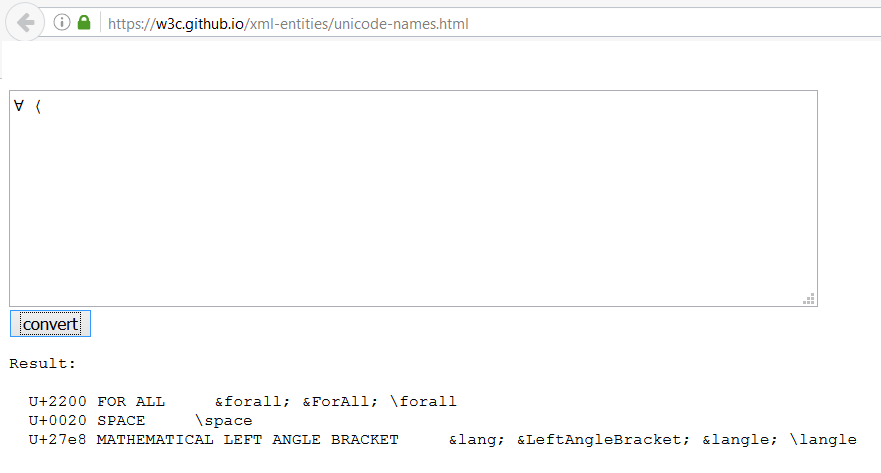 i've been working since the mid-1990s on the stix project, whose goal was to add math and technical symbols to unicode. (several thousand added, largely effective with unicode 4.0, and still growing very slowly.)

a chronology of this project, with data tables showing unicodes and (tex) command names, can be found at http://www.ams.org/STIX/ ; it is not up to date, problems having arisen, mainly with respect to the pua (unicode private use area), and agreed upon but not implemented changes to names associated with some of the math alphanumerics. however, i believe the names in the table were used in implementation of the xits font, and they will certainly be used for the stix fonts.

obviously, as new symbols keep being devised, not every symbol has a unicode. however, the unicode technical committee is amenable to additions, provided a request can be documented by evidence in an article or book from a "recognized" publisher; such evidence would best include an example in context, preferably with the context indicating meaning and intended usage.

as it pertains to this question, the table described here is in unicode order. there is a lot of extra "baggage" in the table, but it should be possible to recognize a unicode and the associated command name without difficulty. (if any errors are spotted, please send word to the address shown in my profile.)

i know of a couple other resources, developed with reference to mathml, but i don't have the links conveniently to hand. i will update this when i find thm.

I have a webpage where you can do this, but it current only has 1985 Unicode characters mapped. (Some of them have more than one mapping where there are multiple ways of achieving the command, so there are actually currently 3041 mappings in the database.) I add more whenever I get the time (which isn't very often).

You can paste the Unicode character into the box labelled "UTF-8 Character" like this: 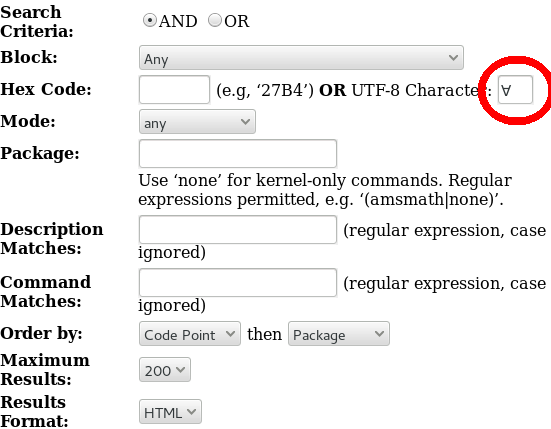 In the case of the forall symbol, it only has one match:

Some of the characters have more than one match. For example, the complement character ∁ has five matches:

So there's a choice of packages in case you have any preference.

Not all Unicode characters have corresponding LaTeX commands, so some of the matches simply fake the symbol, with varying degrees of success, such as the care of "care of" symbol ℅:

The second match doesn't produce a particular good result (which can be seen in the corresponding sample image) but it's simpler to produce than the first match.

I just found this webpage. May you try it, I found some examples I tried with the help of this site.

I've just added this functionality to the text search of write-math.com. 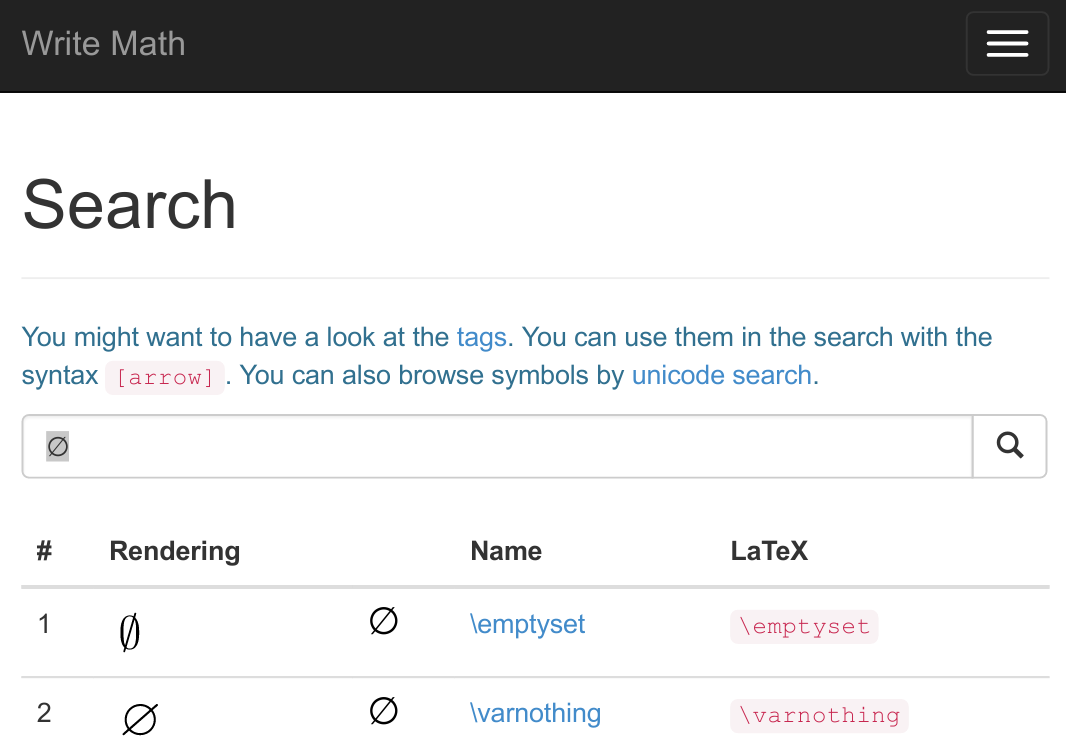 284
Entering Unicode characters in LaTeX
27
Difference between \langle and <

19
The symbol for a map which is an isomorphism?
21
Unicode character look-up
16
Looking for symbol: Shield
4
Where to find a list of all available symbols for ConTeXt?
7
Looking for stylized H-symbol
6
What's the symbol for a triangle pointing to the right (WHITE RIGHT-POINTING POINTER ▻)?
7
Looking for a non-usual symbol for semidirect product
2
Trying to find QED symbol my professor uses to use in Latex?