Is there a way to get simplified Chinese characters generated in a similar environment with CJK package?

For some limitations, I have to use pdflatex.

You could switch to a different engine, in this case xelatex, which I think makes it easier to handle fonts and also other languages. In the case of languages like Chinese, Japanese and Korean, you can load the appropriately named xeCJK package.

When using xelatex, you can load the fontspec package and then use \setmainfont{} to set the document font. By the same token, with the previously named package, you can also load the command \setCJKmainfont{} and load a font specifically for your language, for example I used Heiti TC, where the T stands for Traditional (there's also Heiti SC). But you could use any font that is designed for Traditional Chinese.

Here's what it looks like with a Chinese Lorem Ipsum, although I cannot post the body code with the Chinese part, because it's blocked and I cannot post it.

And here's the code

Why not use the ctex package? You'd only need to load the package and type away... 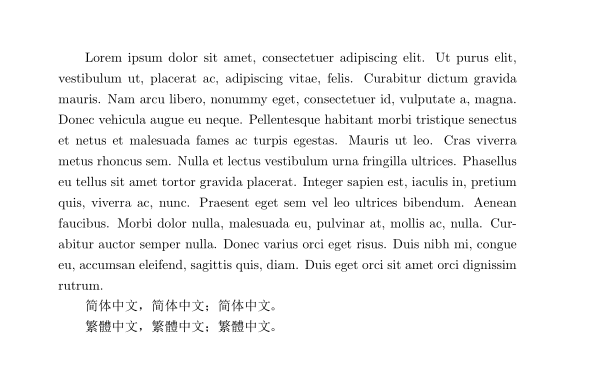 Why not mend the problem rather than the symptom? Pipe the file through opencc (package opencc-tools on Fedora) before running LaTeX:

2
Han characters replace Hiragana when using Meiryo font with CJK
11
How can i use fonts other than gbsn/gkai for CJK Chinese?
5
How to write kanji characters in my document
4
Adding a few Chinese characters in document of classicthesis template
3
Set a specific text color for Japanese, document-wide
3
Quote a dictum in Chinese in a new page before my thesis in English
2
Some Chinese characters go wrong in CJK
9
Mixing Chinese Characters with English (Main Language) in 2019 | What is the "State of the Art"?
2
Chinese characters not displayed when using CJK