I'd like to embed some R into a LaTeX document. After a bit of googling I found that Sweave and knitr allow you to do this. I compiled a simple example with Sweave and it works.

I'd be much obliged if somebody could answer the following questions:

Please note that I'd like to run LaTeX from the command line. I am not interested in IDE solutions.

TIA for your help.

knitr is preferable to Sweave, and ezknitr is a wrapper around knitr that is probably worth using—especially if you are only building documents from the command line (but this limits you to R Markdown; see below); I don't think there are IDEs that have integrated ezknitr use (at least not at the time of writing)—because it makes it easier to ensure the directories and paths are all correct.

knitr/ezknitr (henceforth just knitr) may or may not be preferable to Thruston's suggested approach approach, depending on your use-case.

What follows is some justification for these points, coupled with examples.

knitr is preferrable to Sweave for a variety of reasons. Two main reasons to prefer knitr to Sweave are (i) you get better integration with tikzDevice in knitr, and (ii) chunk options are more versatile.

I should mention the caveat that I've never really used Sweave, but my understanding from reading blog posts on the internet is that it is much more straightforward to use tikzDevice with knitr than it is with Sweave. 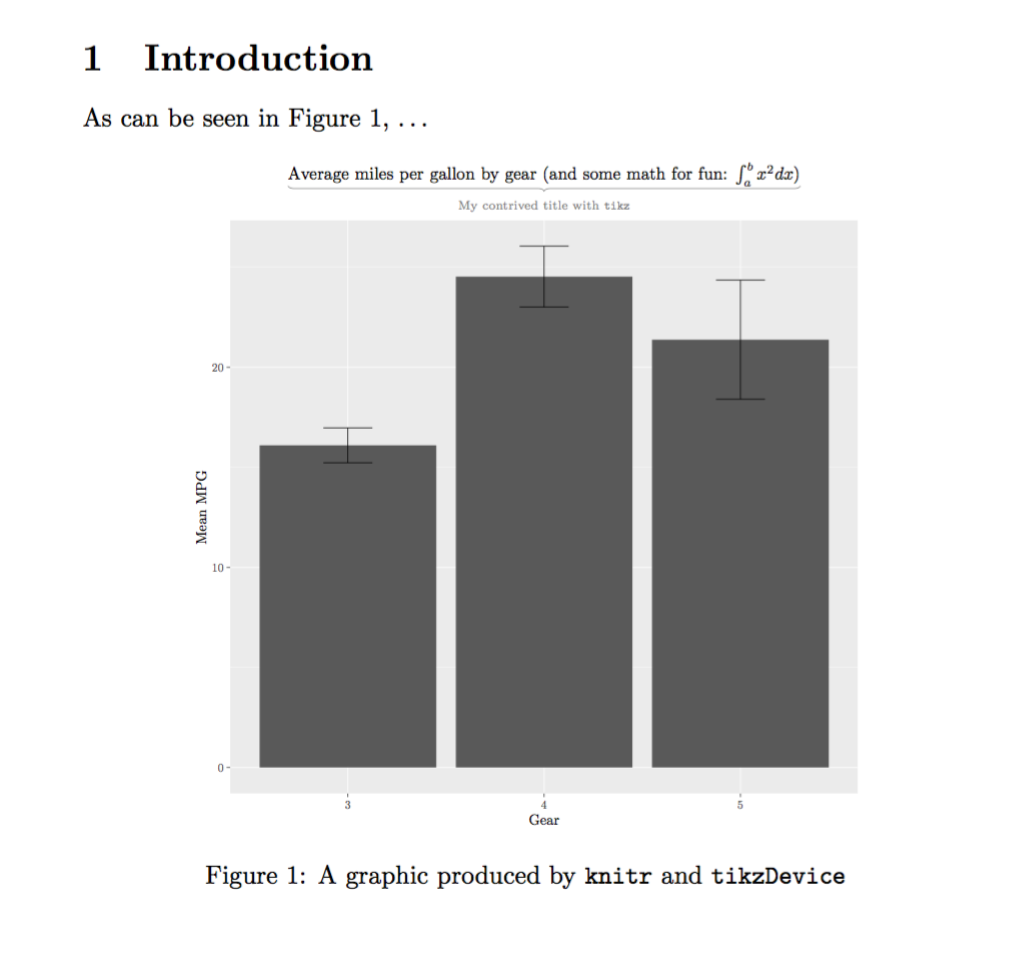 This example is taken directly from Yihui. In knitr (but not Sweave), it is possible to delay the evaluation of certain chunk options, so that you could, for example, include the p-value of a t-test in a caption.

The output of this is: 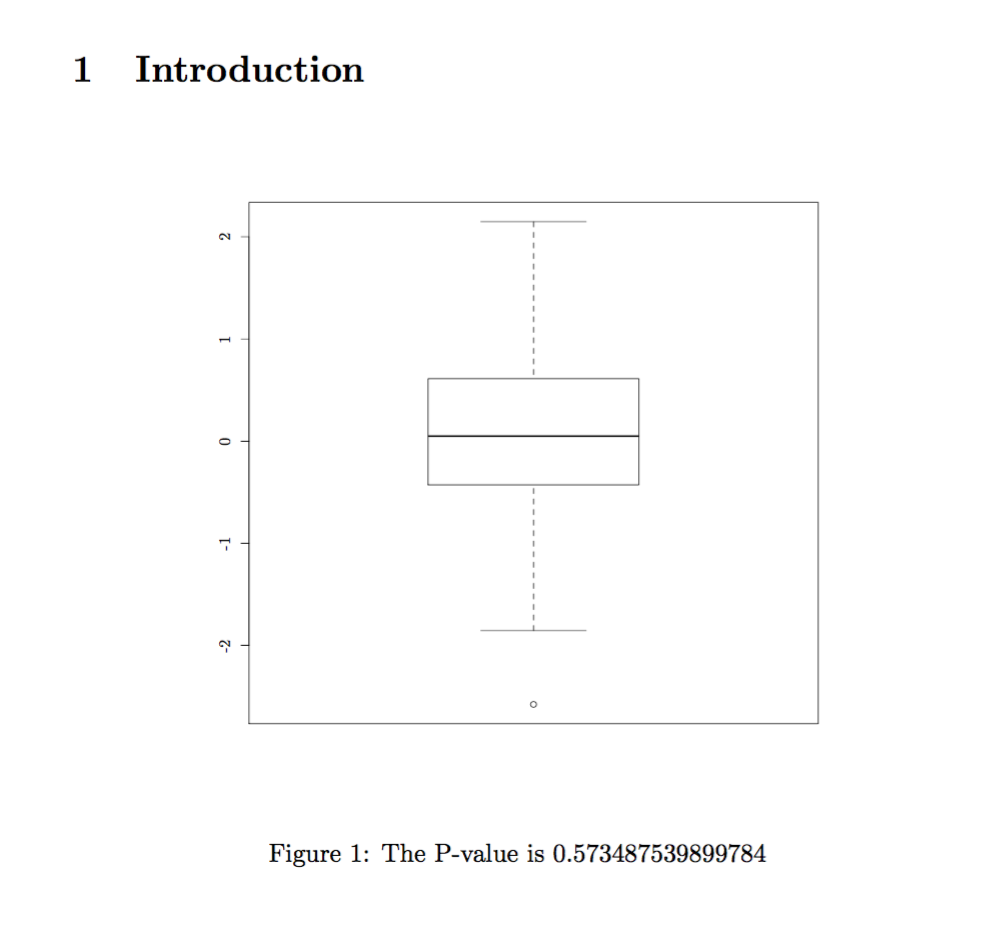 If you prefer to keep your R code and your LaTeX code separate, Thruston's suggested approach is not necessarily preferable, because it is possible to use external R code in a LaTeX document with knitr. That being said, there are some advantages and disadvantages of the two different approaches that are worth mentioning.

Some advantages of knitr over Thruston's suggested approach are:

Some advantages of Thruston's suggested approach over knitr are:

Using knitr to make a document more reproducible (but trading off in readability):

Not using knitr but copying and pasting the values from the output of an R script (thus arguably being more human-readable but introducing more possibility for human error):

UPDATE: It seems that ezknitr does not currently process .Rnw files. Hopefully this is a feature that will be added in the future (see here; also see here).

4. Compiling (from the command line)

For posterity: RStudio—for the most part—is a good IDE for use with knitr and LaTeX (things get dicey as soon as you have a bibliography involved).

You said you were more interested in compiling documents from the command line. When you use knitr, you edit a .Rnw file and then you process it with knitr's knit() function, which outputs a .tex file. You never want to edit that .tex file directly. All changes should be made to the .Rnw file, and then you should regenerate the .tex file using knit().

Thus, you could build your document from the command line by doing something like this:

You could also easily write some sort of batch/make/bash script to do this.2

The baseline approach is just to keep them separate. My work flow on a recent paper was as follows:

The main advantage of this approach was simplicity; I retained all control of formatting in the LaTeX source. The main disadvantage was that I had to re-create the tables semi-manually for each change, and that I had to maintain two scripts. On the other hand it was very useful on this occasion to have an R script that could produce versions of the same chart in two different formats.

Here's my R function to switch between png and eps.

Are there other approaches?

Beside this, it is worth to note that other R packages as the famous xtable and Hmisc can produce some type ofLaTeX code.

What are the merits?

To be honest, I never used lazyWeave, but according to the documentation provides the functionality to write complete documents LaTeX code from within R without messing too much with LaTeX code, being the main strength the design of reports with custom and complex tables. But the same documentation also alert that knitr approach is easier (i.e, messing with lazyWeave functions is a doubtful advantage), that lazyWeave is a "rather inefficient way to go about writing reports with LaTeX" and that "is only intended to provide the most basic functionality of LaTeX".

With respect the documentation, is the typical of R packages, were each function is systematically described even with some examples, but still it is hard to guess how combine them to have a working report, since some buggy aspects are not well explained. I left as exercise how discover that you need the lazyWeave_latexComments="latex" option to avoid HTML comments in the ouput, or why only lazy.matrix(df) alone work (you see LaTeX code in the ouput), but not lazy.write( ...,lazy.matrix(df),...) although it is supposed that should work regarding the non-working example.

In spite of this, below is showed my first moderately successful test.

Others packages as xtable or Hmisc can produce only LaTeX chunks but fortunately can be used without problems with Sweave/knitr chunks (using the options results='tex' or results='asis' respectively) or even lazyWeave.

1) Run the following R script. (It is assumed that lazyWeawe is already installed)

1b) Edit the ouput file Example.tex and remove the packages breakurl and Sweave to avoid compilation errors, and save it. This point should not exist. It is possible add additional LaTeX packages in the lazy.file.start function but not remove the default package. However, it is a minor problem. If you need a working file without any edition, it should be to easy construct your own through lazy.text("\\documentclass ...") or even rewriting the lazy.file.start() function.

2) Compile Example.tex. The result should be: 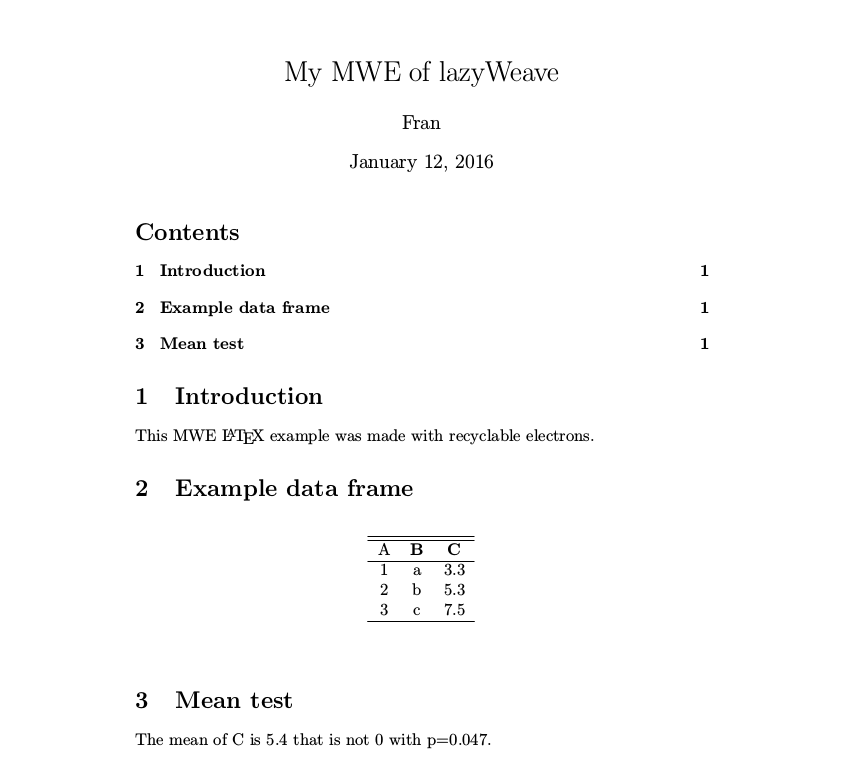 To get the same fonts, use the following method (for helvet):

I've made use of the function described in this answer https://stackoverflow.com/q/36660598/1664978, which highlights that automatic but succinct production of tables are possible.

23
How to do literate programming in TeX?
39
Different approach to literate programming for LaTeX
2
Controlling the size of tables produced from the R functions tabular() and latex()
6
Controlling formatting options for xtable
2
Getting `tables` R package to print a text file that I can import into my .tex file
11
Listings: syntax for literate
2
Can’t yet set up knitr with TeXShop