How can I use Bengali script in an English document?

I am a Linguist and I need to use Bengali script inside an English article which is predominantly English. I have found many answers but they only seem to be useful when the whole document is in Bengali. I should mention that I use the following:

Let me describe the problem: for example when I start my document as:

It doesn't show any error and the pdf looks fine except the Bengali letters just disappear.

Using the polyglossia package, it works quite well in XeLaTeX: 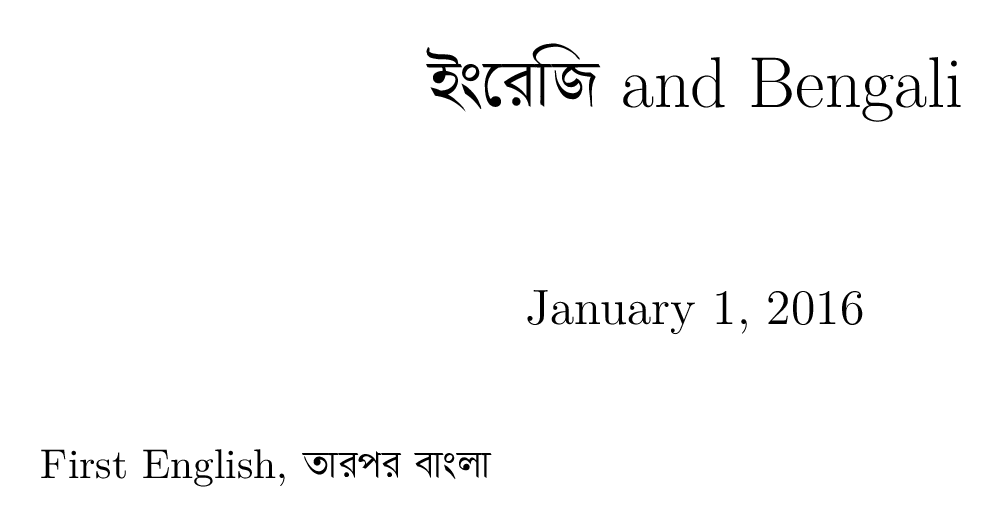 (As per this answer, I installed the Akaash font from this website. You can substitute in another font if you prefer.)

Note, however, that if I compile with LuaLaTeX, vowels are not handled correctly: the first word of the title should be ইংরেজি, but instead we have this, which is wrong:

Unfortunately, I don't (yet) know of a workaround in LuaLaTeX.

I don't know anything about Bengali so it took me a while to figure out a font I could use for this. However, I get similar output to Arun Debray when compiling with LuaLaTeX

which I gather is wrong, whereas XeLaTeX produces

which I gather is less wrong.

Since this uses an entirely different font, I guess that LuaLaTeX cannot cope properly with this script at the moment. (Or it needs some additional something which XeLaTeX can do without.)

The font I used offers two versions of Bengali script

However, I am not sure how to enable the second one to compare. I guess this could be done as a raw font feature, but perhaps there is a better option for this, which would still have it correctly recognised as a script?

Not the answer you're looking for? Browse other questions tagged fonts luatex linguistics indic or ask your own question.

1
How to introduce a few lines in Bangla font in an otherwise English document in PdfLaTex?
39
How to write Bengali in LaTeX?
16
Devanagari/Indic in LuaTeX
4
How can I use a Gurumukhi font to typeset Punjabi with XeLaTeX or PDFLatex?
7
ConTeXt + XeTeX (TeXLive 2012) does not work for Indic scripts like Malayalam
3
How can Bengali v.2 (bng2) be used to typeset Bengali with XeTeX?
0
How can I get Bengali Sign Anusvara, Anji, and Uu in XeLaTeX?
0
Unicode characters not displaying in latex

5
Asana-math + LuaTeX : missing greeks/arrows
3
TeXLive/PDFTeX fonts loading problem
7
how to typeset document in indian script
39
How to write Bengali in LaTeX?
3
How to insert Bengali text in IEEE conference paper?
3
How can Bengali v.2 (bng2) be used to typeset Bengali with XeTeX?
3
Use of enumitem breaks Bengali enumeration