Visualization in LaTeX of hamming distance

I have for example the following two strings:

I would like that each number will be place in a box and the boxes with the number one should be higher then the ones with zero.

Later on I would like to play with the colors, between boxes which doesn't contain the same number.

I would like some help how to create the boxes.

You can construct a macro that iterates over input, reading one token at a time. Then you compare the token to 0 or 1 and decide what to do. The commands \zero and \one are responsible for the actual typesetting.

Here is a solution using the listings package. Is this close to what you want?

This solution is adapted this question typesetting different characters with different colors in a DNA sequence, which also has several other methods which may be helpful.

there are three optional arguments: <position> <color 0> <color 1>. they are counted from the left, if you want to define the <color 1> then you have to specify the two in front, too. 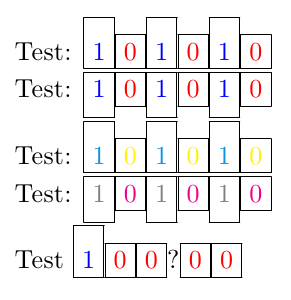 Not the answer you're looking for? Browse other questions tagged tikz-pgf pstricks or ask your own question.

23
typesetting different characters with different colors in a DNA sequence
18
Listings package: How can I format all numbers?
5
Problem with the alignment of characters

4
Tikz figure with multi columns table
3
How to draw a diagram with boxes of text inside each other and have them laid out automatically?
5
Strange behavior with TikZ animation
5
Draw table-looking layout with axes
3
Go through a list of numbers in an argument of a macro
9
Integrated blocks for thesis structure
0
Visualization of aligned text columns
4
Create catalogue like serial number with reference text
0
How to set tikz node size in terms of other coordinates?
4
Create cutout of rectangle, where cutout is also node