There's an amazing fraction macro here* for FontSpec with LuaLaTeX (*: that would be the second macro in that answer, called \unifrac, which I like better than the first "macro"/ using the frac feature), but it only works if the font you're using has OpenType features dnom and numr. The font that I use, MinionMath (used with unicode-math, which requires FontSpec), does not have these features for anything beyond numbers (many fonts don't), and even fonts that have these features for letters don't have it for Greek letters.

To be honest, that macro looks absolutely beautiful for many fractions that I use for in-line text and exponents, but I wish I could use it for things other than numbers. I'm aware of the \sfrac macro which can use all letters (as well as \nicefrac and \tfrac) but I like the look of the \unifrac macro much more.

Is there any way that I can modify \unifrac to behave like \sfrac in the sense that I can use it with non-number characters, but retain the look of \unifrac?

I'll provide a MWE here along with pictures:

For a font that has the dnom and numr features (for numbers), such as EB Garamond, this results in: 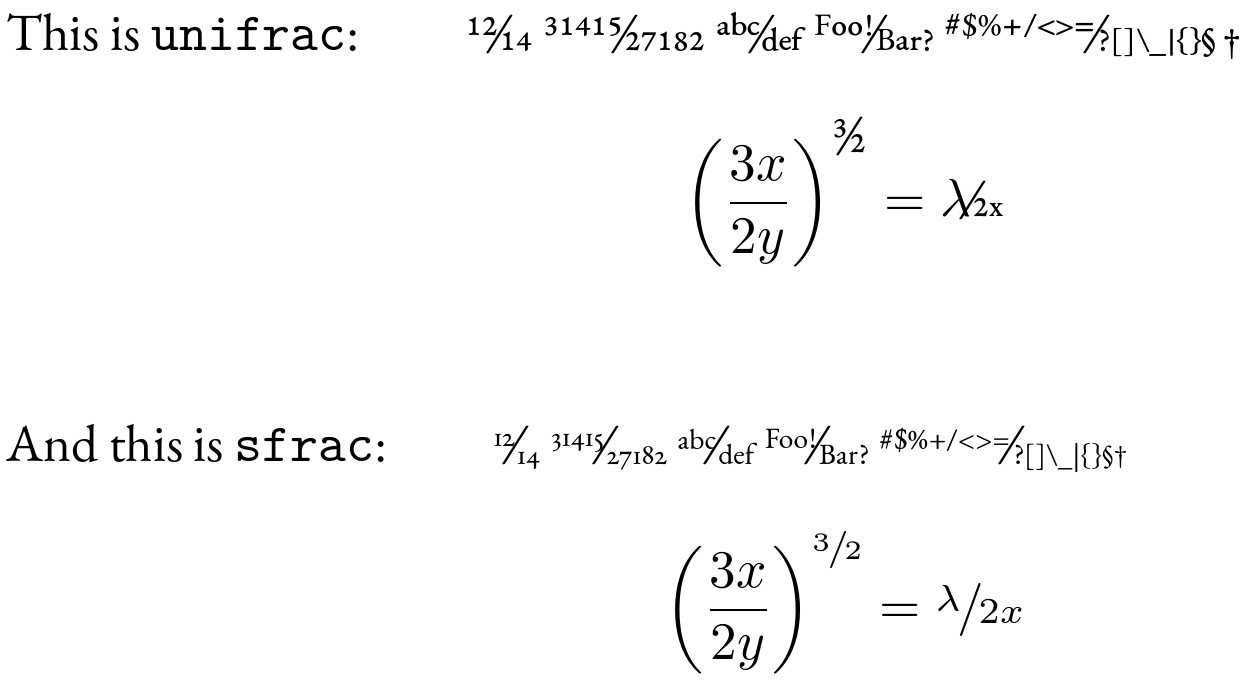 For a font that doesn't have these features, such as XITS Math, this results in:

OpenType support in TeX as of when I first wrote xfrac in early 2004 was basically non-existent - XeTeX hadn't even been released back then. Therefore, the package was never designed with that in mind. Besides, the fundamental purpose was to provide a way to write nice fractions for fonts that didn't include them.

The package could very likely be made OpenType aware by making a few changes as to how fonts are selected. However, you should also be able to define an instance for the font in question by using the numerator-format key to select the font. The following instance declaration will basically make \sfrac behave as you wish for your chosen variant of Garamond. This is very similar to the Janson example from the manual.

Here I create \altfrac{}{}. It does not require fontspec, it obeys math mode, its font is larger than that of \sfrac, the denominator lies on the baseline, while the top of the numerator I tries to lay at the top of the normal text font. The numbers are presented in \footnotesize. The slash is a horizontally stretched / to give it more of the fractional slash appearance.

It's downside is that is does not work properly if the current fontsize is anything other than \normalsize.

Not the answer you're looking for? Browse other questions tagged macros luatex fontspec unicode-math fractions or ask your own question.

91
How do I typeset arbitrary fractions like the standard symbol for .5 = ½?
1
\nicefrac or \xfrac in \displaystyle

8
Less vertical space in frac
10
\boldmath with unicode-math AND fonts with a MATH table
3
How to handle different points sizes of different fonts?
2
Text size to match font size in inline fraction
4
Setting up a sans serif math font with combofont: large integral wrong
0
Accents misaligned with unicode-math and STIX2
1
Changing the size of the mathfont, except for the numbers