Inconsistent spacing of \dots and … with amsmath

The spacing around the ellipsis is not the same for \dots and … in the document above (the third case is if I remove the \DeclareUnicodeCharacter{2026}{\dots}):

How can I get the same spacing with \dots and …? Hopefully this can be done without changing anything in the formula itself, just in the \DeclareUnicodeCharacter code, as otherwise I'm likely to forget the hack most of the time, and the formulas are less concise.

The problem disappears if I'm not using amsmath. 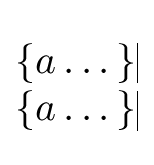 \dots looks ahead at the next token to see whether to use low or centered dots. \DeclareUnicodeCharacter wraps its definition in \IeC{...} where \IeC (here) is just a macro that does nothing but use its argument.

But the main problem is that \dots uses \futurelet (rather than say \@ifnextchar ) so it does not skip over white space while looking for the next token. this does not usually matter for \dots as white space is ignored after a command name, but not after ... (which is the issue that \IeC addresses, to make sure that input enc characters don't have definitions that end with a token that forces white space to be ignored if written to an external file such as table of contents.

So here I define ... to take an argument and return it which is a (more or less safe) way to force space after the character to be ignored, so the \dots tests see \} not a space. The only unsafe part about that is that {…} would give a parse error as the argument parser would hit the end of group while looking for #1.

Not the answer you're looking for? Browse other questions tagged spacing amsmath ellipsis or ask your own question.

6
How can I make amsmath's \dots look ahead after macro expansion?

15
How to define the default vertical distance between nodes?
3
english number and ltr direction in xetex
10
Left aligning equations without align character
5
How to make \dots from amsmath and ellipsis work together
8
Tag placing with amsmath
2
Align equations within one line
0
flalign, leqno and equations left aligned. Overlapping of equations and tags
0
Align all text in bullet