Why does xelatex produce different files from the same deterministic sources?

When processed with "latex" you always get the same DVI file, identical everywhere except for the date.

When processed (multiple times) with "pdflatex" you get the same PDF file, with the exception of an ID and the Date, and the same thing for "lualatex".

But when processed (multiple times) with "xelatex" you get wildly different PDF files, with different sizes. One can see the differences easily with "vimdiff".

Why is it the processing with "xelatex" not deterministic - not the same for the same sources?

The issue is related to the driver: xdvipdfmx. In order to generate unique tags for fonts, random number is used. Try

each time you run

What seems to differ is the actual binary encodings of some parts. I trust that the pdf rendering does not vary at all. In my experience the file size changed only by plus or minus 1 byte (mac os x). I have done an ediff in hexadecimal mode of two such pdf's, here is a snapshot of where the first differences appear: 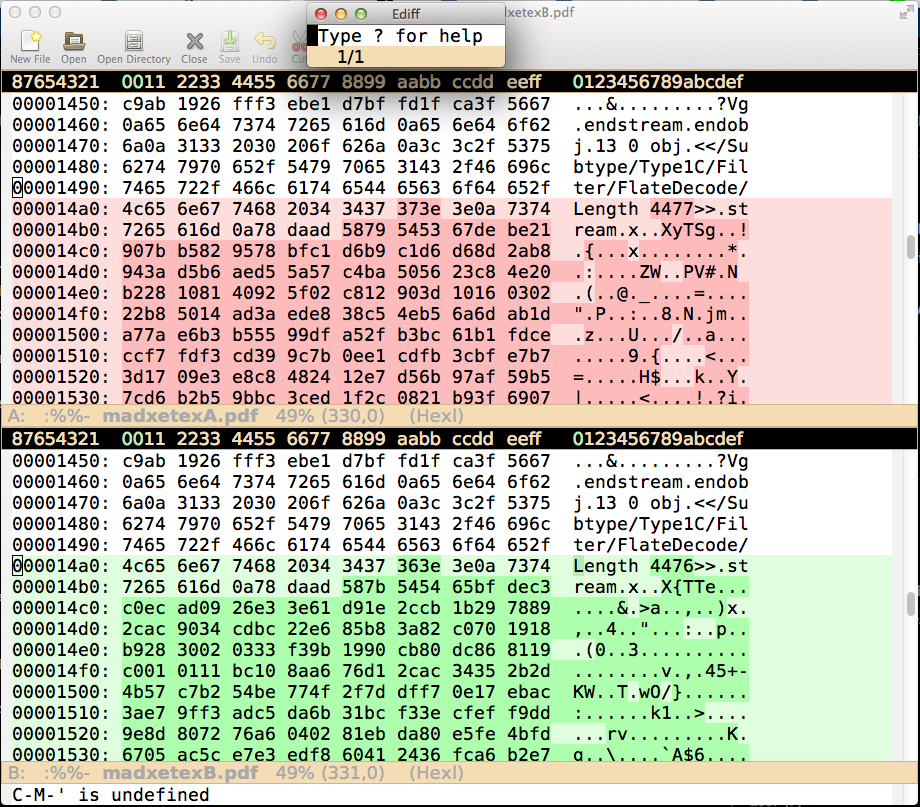 This first difference thus occurs in a part of the pdf relative to the partially embedded font. I don't know what causes this.

Generally speaking I can imagine that if you have say some 213 bytes thing which must be stored in 256 bytes, then the last 43 bytes may be random memory, if moreover one or many such things together are compressed then you get varying result. On undecompressing, there will be some varying random junk after structures terminators (or after a given number of bytes). Like non-coding DNA. Which perhaps is not so much non-coding, but let's not digress.

Only someone familiar with XeTeX source code can answer convincingly I guess.

Don't worry about the C-M-' undefined, I was trying to capture the thing via keyboard shortcuts I had forgotten.

Not the answer you're looking for? Browse other questions tagged xetex or ask your own question.

2
\mathrm and \Omega in XeLaTeX
20
PDF file size with LuaLaTeX vs XeLaTeX
2
Using a handwriting font from myscriptfont.com
9
How to create identical PDF files with xelatex?
5
Is there a LaTeX/ConTeXt Rosetta stone out there (i.e. LaTeX and ConTeXt files producing the same output)?
16
Why Does Word Spacing Change Drastically When Using Libertine/Libertinus with the Various LaTeX Engines?
1
Computer Modern (Default LaTeX Font) in Serbian Cyrillic Script by XeLaTeX