Making arrows not touch in TikZ

I'm trying to make a fairly simple diagram using TikZ, along the lines of the following examples:

What I don't like in the first picture is hopefully clear: I would much prefer that the arrows be spaced out above D, rather than all collapse to a single point.

The second picture doesn't bother me as much, since the clustering here is just of line segments and now arrows, but if there were a way to make the three edges spaced out as well, that would be quite nice. (See the top diagram in the chosen answer to this post for an illustration of something I would like.)

I can of course achieve all these results artificially, just by placing nodes separately, and then mucking about with the coordinates of the ends of the arrows. But it would be great if there were a simpler solution. Many thanks for any insight you may have.

I would use a \node to place D, and then draw the lines using the name of the node. This automatically solves the problem. Another option would be to use shorten=<dimension> to shorten the end of the arrows by the given dimension. You can also control the ending points of the arrows explicitly, as my third example suggests.

One possibility is to use the shorten >= parameter. 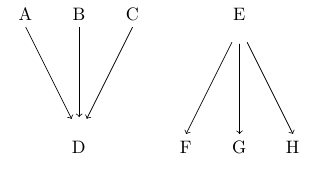 10
How to prevent a TikZ arrow from touching a node?

5
How to have one straight arrows surrounded by two curved arrows (TikZ)
16
Numerical conditional within tikz keys?
10
Vector field on a ball
12
Drawing rectilinear curves in Tikz, aka an Etch-a-Sketch drawing
9
Line up nested tikz enviroments or how to get rid of them
1
Tikz: Curly brace incorrectly positioned
3
How to place nodes in an absolute coordinate system in tikz
2
TikZ node positioning, opacity, arrows and draw controls
3
Arrow between BTrees
3
Document header with tikz