What about \cyrdash in EU1 and EU2 encodings?

cyrdash is defined in T2A, T2B, T2C and some other legacy encodings but seems to escape from EU1 (xetex) and EU2 (luatex) encodings. cyrdash should, by idea, print something intermediate between \textemdash and \textendash (\cyrdash is 20% shorter than emdash). It is used in Russian, Ukrainian, Bulgarian and Mogolian languages instead of emdash, so these languages are by fact discriminated.

If I am right and \cyrdash is indeed lost, could the latex development team please extend EU1 and EU2 encodings to provide a text command for \cyrdash? It might be called \textcyrdash.

What is the codepoint of cyrdash in Unicode tables?

UPDATE: Here is Minimal Working Example. Results depend on the engine used to compile the example. I tried xelatex and pdflatex.

Babel with option russian redefines ligature --- through \cyrdash. Pdflatex takes \cyrdash and \textemdash from a same codepoint of LH font if Russian language is selected; then their sizes are equal; if Englsih is current language than \cyrdash is undefined (rises an error), and \textemdash is taken from CM fonts and is longer as compared to itself in case if Russian is selected.

In case of xelatex, \cyrdash macro is not defined in current encoding so babel fakes it as \hbox to 0.8em{--\hss--} which turns out to be approximately 80% of \textemdash.

Ulrike Fischer directed me to a valuable list of all available dashes in Unicode. I did not find a reasonable candidate for \cyrdash there although from my own experience of publishing books I know that editors of Russian publishing houses sometimes are very rigorous regarding the size of dashes. I would also agree that Microsoft Word automatically produces correct dashes between russian words but I am not sure (and cannot check right now) if it produces longer dashes between English words.

So I don't see now a good uniform solution for \cyrdash in case when it should be taken from the same font as \textemdash. Perhaps, except that soultion which is currently used in babel-russian. Can some one propose a better way?

UPDATE 2: My original vision of the problem was wrong. With the aid of respected TeX'perts it became clear that legacy LaTeX engines take \cyrdash and \textemdash from the same codepoint 22 but possibly from different fonts. As a result, ligature --- might change its length after \selectlanguage. So, now I would reformulate my question as follows:

Is is good or bad practise to mix two versions of ligature --- (which differ by their width) in the same multilanguage document?

As far as I know there is no Unicode code point for \cyrdash, but you can typeset it in xetex and luatex as \cyrdash or as "--- if you include \usepackage[babelshorthands=true]{polyglossia} in your preamble.

Running it with lualatex 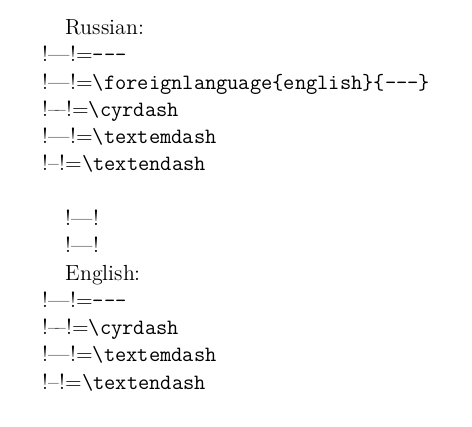 Not the answer you're looking for? Browse other questions tagged fonts fontspec input-encodings font-encodings or ask your own question.

49
What is the difference between font encoding and input encoding?
13
What is considered a token for non-standard input encodings?
23
How to automatically adjust the emdash length according to current language?
13
greek encodings under lyx
4
LuaLaTeX from texlive-2014: Command \textsubscript unavailable in encoding EU2
6
fontenc description OT1, EU1
1
Font encodings T1 and T5 coexist?
3
LaTeX 2e's verbatim-environment and different input-encodings
2
What are rules for naming encodings?