Is it generally a good idea to insert some glue in \vspace?

I have seen a lot of posts like this one \parskip stretches more than expected that use some glue inside \vspace. I wonder if it is good idea to define a new \vspace command with some glue to replace the normal one in all the cases. Something like

I tried to persuade myself for the usefulness of such a command for simple cases but without success. For example, I used

without any difference. So I am somewhat confused. Maybe there are some "special" cases (like the above post) where one actually needs to have such a command, but generally there is no need. Maybe it is better to use the well known command \\[...ex] and leave TeX to place some glue, if it is realy needed.

I know this question is a bit vague or maybe already answered. Feel free to edit it/suggest something in the comments.

Also if, as in the question you use \vspace within a paragraph, the effect is well defined but slightly odd: the space is not added at the point of the \vspace command but added later, after the paragraph has been broken in to lines, after the line at which the vspace was added.

is the same as

If, as is common in article document classes, \raggedbottom is in effect then fil glue is added at the end of the page, as that is infinitely stretchable, any finite stretch glue added would not stretch and only the natural length component would be used.

In some document classes (including the default ones) some small stretch between paragraphs can be useful in helping page breaking (latex sets the default \parskip to 0pt plus 1pt) but normally this should be a document-wide setting not adjusted by hand in each case.

Your command works as expected, but as David already wrote it is a quite bad idea to use such stretchable space inside a paragrah. 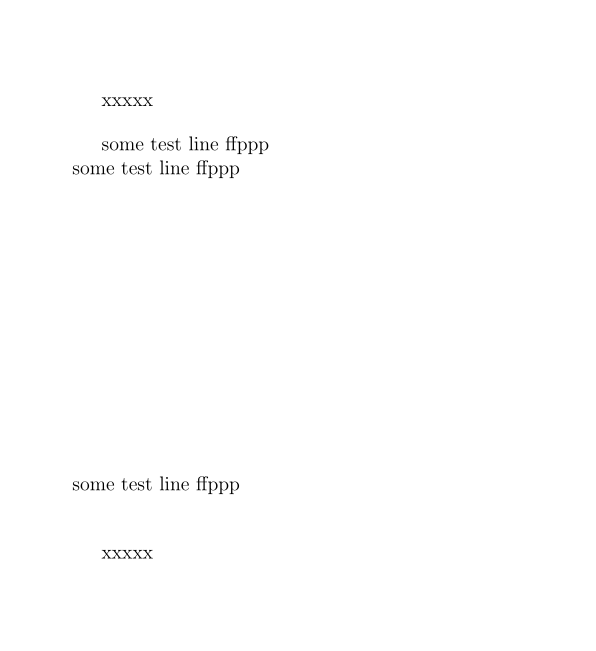 Not the answer you're looking for? Browse other questions tagged spacing text or ask your own question.

16
\intextsep gives doubled space
4
Environments with thmtools => too much space if using itemize at the end (also problem with q.e.d. symbol)
7
Aberrant vertical spacing with {align} and friends?
13
I want to create a command that will conditionally gobble up trailing whitespace: I want an “\unxspace” command
5
creating new command including siunitx - error due to spacing (?)
3
Reduce space between equations and text
1
Is a \vspace placed on the end of a paragraph a bad LaTeX coding?
2
Label equations with braces and line breaks