How can I use margin and column options with right to left list (arabic language).

I have defined new enumeration ..., أ , ب for my right to left list, but if I add mergin or any other option for itemize environment I get a bullet instead of my defined label. 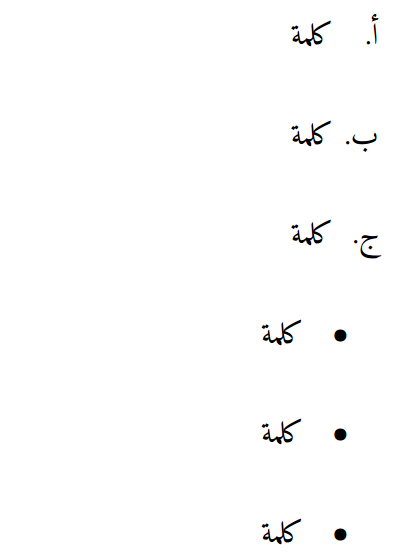 There are two ways one can set up the column versions of itemization in right-to-left environments. (This works in the beta, and I do not know about the stable version from TeXlive 2015. In any case, the beta will soon find its way in TeXlive 2016.)

The first approach is to change the behavior for all itemizations in your document, which is convenient in primarily right-to-left documents. Just put the following in your preamble.

The second approach is to change the direction for individual itemizations. Here you had better be careful, as the other answer pointed out, that keywords and assignments should be separated. Look at the example below, using the second approach.

To use the horizontal method in right-to-left setting, try the following.

One more point: In the current beta, you can use \abjadnumerals and \arabicnumerals (which produce the numbering you seem to like), in addition to the \arabicdecimals (and \persiandecimals) macros or corresponding keys that produce Indic numerals. A bunch of similar numbering methods are defined in core-con.mkiv.

There are two mistakes in your code:

So, your second item group should start like this:

Not the answer you're looking for? Browse other questions tagged context arabic right-to-left or ask your own question.

31
Typesetting Right-to-Left math
2
How to invert direction of brackets (for a right to left text) in ConTeXt?
6
Switch twocolumn between right-to-left and left-to-right with the package multiind in polyglossia
2
How to modify enumerate label format for right to left list in context
3
Arabic cells' tables rendered from right to left
4
ConTeXt: Customize bibliography list field rendering
3
Linguistic trees and right to left
5
Arabic Right to Left using Luatex
1
Right to left column order in index for arabic with context
0
Right-to-left pagecolumns and markings in ConTeXt